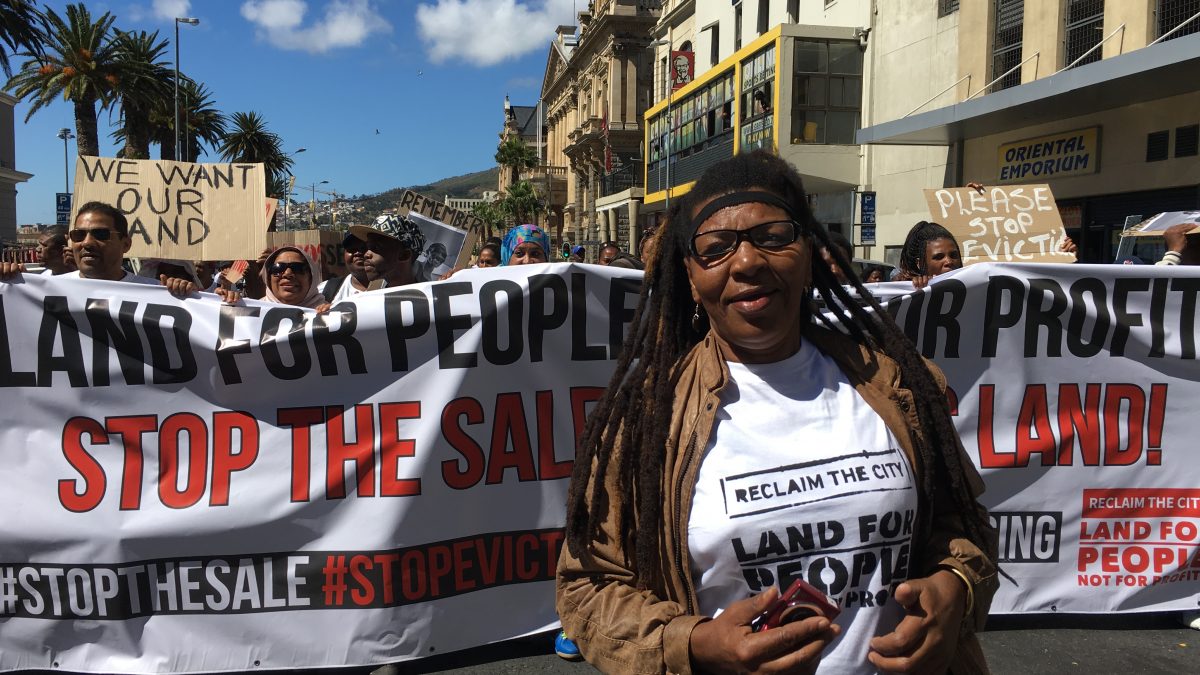 The City of Cape Town’s response to land occupations is further eroding the already weak relationship between social movements and the local municipality. A change in approach is desperately needed.

Cape Town is one the most unequal cities in the world. The enduring legacy of both colonialism and apartheid is inscribed in every aspect of daily life. Access to safety, employment, education, healthcare and housing is still largely determined along racial lines. A wealthy and predominantly White minority lives in well-located areas with good access to jobs and services, while the poor and working-class Black majority are forced to live in poorly-serviced settlements on the city’s periphery. Little progress has been made in reversing this segregation and exclusion, and many residents spend more than a third of their income and a significant amount of their time travelling in and out of areas of economic opportunity.

The City of Cape Town – the sphere of government that is largely responsible for housing provision – has built less than 10,000 homes a year for at least the last 10 years. In 2018/2019, just 5,692 housing opportunities were provided by the municipal government. At the same time, the estimated housing backlog in Cape Town is 350,000 homes, meaning that roughly one third of all households live in informal settlements, backyard shacks, or otherwise unacceptable housing conditions. In short, the housing crisis is growing in scale and intensity year upon year.

This context is crucial to any discussion of land occupation in the city. When the majority are brutally and systematically denied access to land and housing, it is only natural that people will take matters into their own hands. Indeed, the illegal occupation of both private and public land has been a feature of South African urbanisation for hundreds of years. After all, everyone needs a home.

The severe economic hardship unleashed by COVID19 and the associated lockdown has pushed millions of South Africans further into poverty and compounded the consequences of the broader failure of Cape Town’s housing system. According to data collected during the National Income Dynamics Study – Coronavirus Rapid Mobile Survey, roughly three million jobs have been lost so far, exacerbating the country’s exceptionally high unemployment rate of around 30%. Like in many countries globally, there has been no support offered to renters in either the formal or informal rental sectors, which has meant that many people have been forced out of their homes despite an official moratorium on evictions. The result is a growing number of people in desperate need of access to land and housing – and therefore a notable increase in the scale of land occupation.

Unfortunately, the City of Cape Town’s response has largely failed to acknowledge the prevailing economic reality and the difficult choices that many residents face. Rather than understanding the root cause of increased occupations, the City has built on their previous approach of vilifying and attacking occupiers – both physically and discursively.

It is important to avoid presenting all occupations as homogenous. Some are highly organised and explicitly linked to political movements, while others take place in a more spontaneous and ad hoc manner. Either way, the state’s response remains fairly consistent, and indicates a breakdown in understanding between the residents of Cape Town and the people and institutions that are meant to serve them.

Social movements and civil society organisations, such as the Social Justice Coalition and the Khayelitsha Community Action Network, have long critiqued the municipality’s approach to governing Cape Town’s large informal settlements. Several court cases have been launched to highlight the uneven nature of service provision, with informal settlement residents calling for adequate sanitation, improved public lighting, and a more equal distribution of police resources. There is also a long history of protest and litigation relating to housing provision and the City’s approach to evictions.

Most recently, a video emerged of Bulelani Qolani being dragged naked from his home by the City’s law enforcement unit – who subsequently demolished the structure. The video sparked national outrage, both for its undignified nature and the fact that the eviction was being carried out despite a country-wide eviction moratorium. In court papers, the City argued that his home was unoccupied, and that the eviction was therefore legal. While the City eventually lost their case, the eviction of Mr Qolani highlights a rapid escalation of municipal violence towards occupiers. Cape Town is not unique in this regard, and similar government transgressions of the eviction moratorium have taken place across South Africa.

But what is perhaps unique about Cape Town is the vast public resources that have been spent militarising municipal policing. Other municipalities generally hire private security firms to carry out evictions and demolitions. The Cape Metro Police are primarily meant to police by-law infringements and traffic violations. However, significant investment in ammunition, armoured vehicles, and increased personnel means that they now operate as a form of municipal militia. The Metro Police have been accused of fining, harassing, and abducting homeless people in Cape Town’s inner city, and have been shown in court to repeatedly carry out illegal evictions in informal settlements. Instead of addressing the causes of social tension, the City is exacerbating it significantly.

The power of discourse

The City of Cape Town does not only contest land occupations physically through evictions and legally through the courts, but also symbolically through the use of discourse. Occupations are repeatedly framed by City politicians as irrational, illegal, invasive, dangerous, criminal and unreasonable. Similarly, the municipality frequently emphasises that it has a ‘zero-tolerance’ approach to occupations, and issues press statements celebrating the destruction of illegally constructed homes. In addition, occupiers are regularly accused of ‘jumping the queue’ of formal housing allocation, positioning them as self-interested opportunists. These representations are important, and play a crucial role in the City’s strategy. There is no official recognition of the fact that occupying land is an entirely rational response to a growing housing backlog, poor living conditions, rampant spatial inequality, and limited state capacity. Instead, occupiers are represented as law-breaking criminals who must be dealt with swiftly and decisively.

Representation is crucial because it affects people’s perceived security of tenure. As scholars of housing and informality have long recognised, perceived security of tenure has a material impact. People who feel insecure are unlikely to invest time and resources into upgrading their homes or incrementally securing water, sanitation, and electrical services. The constant threat of eviction therefore not only causes deep psychological harm, but also actively prevents people from improving their homes and neighbourhoods. The same threat also further erodes the increasingly damaged relationship between residents and the municipal government.

Surveillance and the demonisation of social movements

Despite the fact that many occupations are not linked to an explicit political agenda, the City often claims that the increase in land occupations is a result of opportunistic social movements and political parties with sinister ulterior motives. No evidence has ever been produced to support this assertion, despite increasing surveillance of housing activists. The City recently confirmed what housing activists have known for years – that they are effectively spying on social movements and their leaders. Again, such a move has only served to increase tension and damage the relationship between movements and the local authority. While civil society organisations and social movements sometimes successfully engaged in existing public participation processes in the past, the mutual trust that underlines these engagements has all but vanished. As a result, local democracy suffers.

The municipality is obliged to manage land use and settlement patterns to ensure that public health standards are met, that infrastructure is not overburdened, and that social tensions are not aggravated. This is a difficult task and is made more complex by the frequency of land occupation. However, the City cannot evict and intimidate its way into an efficient and equitable spatial form. Instead, greater emphasis needs to be placed on leveraging the creativity and innovation of people who organise collectively and build their own homes. Rather than punishing people who live informally, the City needs to learn from their strategies. Municipal democracy in Cape Town is already rigid and constrained in many ways, and the failure to understand or empathise with occupiers closes the space for collaboration even further.

The history of Cape Town suggests there is little hope in expecting traditional political parties to interrupt this housing crisis, or to explore radically different approaches to meeting basic human rights. Taking some inspiration from movements elsewhere, there have been some initial discussions of what the potential could be for fielding independent candidates and building alternative systems of community-led governance. For now, it is clear that only radical new strategies that change the fundamental relationship between the City and all of its inhabitants – irrespective of race – will be capable of addressing Cape Town’s acute housing crisis.

Nick Budlender is a researcher and political organiser from Cape Town, South Africa. His work primarily focuses on issues relating to housing and urban governance.

Report #1: In the city, at the border. Movement and grassroots initiatives during the pandemic.