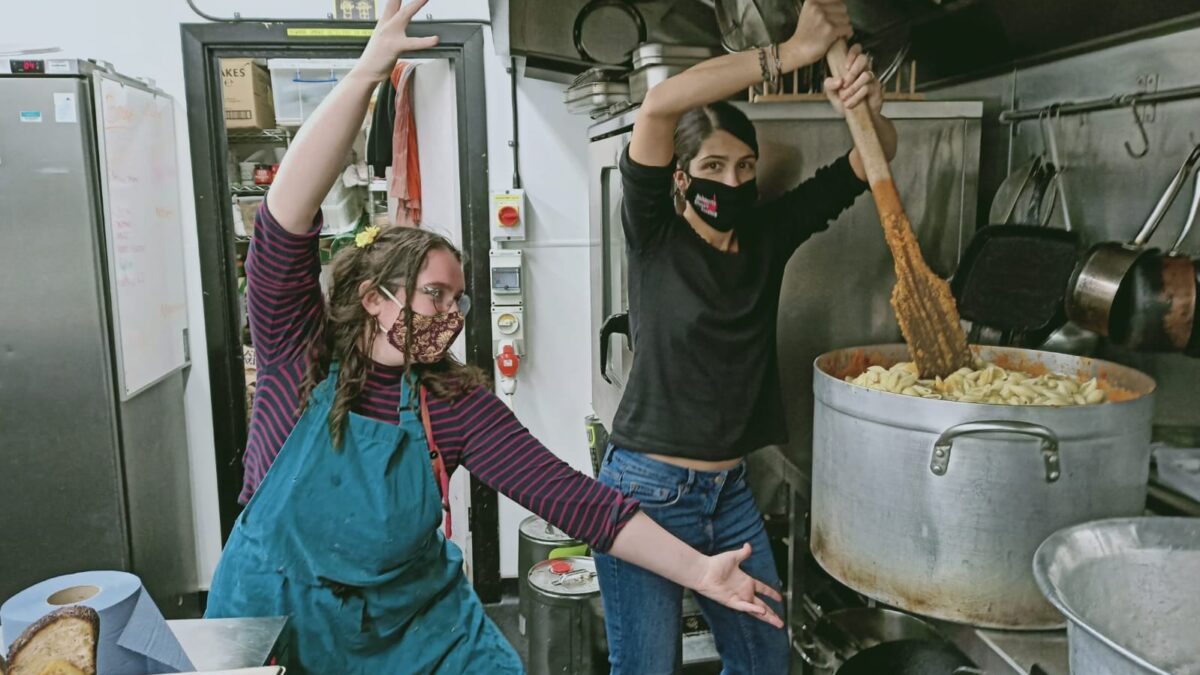 Cooperation Birmingham was envisioned in 2019, when a group of local residents were inspired by visiting members of Cooperation Jackson. Our project aimed to form a basis for a solidarity economy in the city and provide material infrastructure that would allow autonomous community groups to thrive. We planned to start slowly but surely by building a network, developing a participatory model, and gradually initiating our activities through 2020. However, when the Covid-19 pandemic struck, we decided to start Cooperation Birmingham as a mutual aid network to provide crisis relief for those needing to self-isolate. Our members included workers from the Warehouse Cafe Co-operative which served as the base of operations. We collectively took the decision to lock down in advance of the prevaricating Conservative government in the spirit of the slogan: “we take care of each other”.

During our first year of life, we focused on creating a solidarity kitchen based at the Warehouse Cooperative Cafe and supplied by donations that delivered more than 20,000 meals to people in self-isolation around the city. Our motto was: “We ask no questions and we take no money”. We also began an ongoing mask-making project and a newsletter. And most importantly, we built a network of more than 200 participants who helped with cooking, distributing, handling phone calls, and onboarding new members, among other activities. We decided not to use the “Covid 19 Mutual aid” moniker adopted by most groups, and instead founded Cooperation Birmingham. By doing this, we aimed to shift the focus beyond immediate crisis relief. We wanted to show that, while forged in the pandemic pressure cooker conditions that we all faced early on, Cooperation Birmingham would be a lasting organisation that could articulate emancipatory commoning practices in an autonomous way.

At our first Annual General Meeting in March 2021, we voted to become a membership organisation and to develop a long-term confederated model that would start with two new projects: a new solidarity cafe and a media co-operative. This will allow us to pursue our goal of creating co-operative spaces and infrastructure in a democratic way, bringing mutual benefits to members who participate in the project and raising the awareness about our project and the prospects for cooperation in the city. 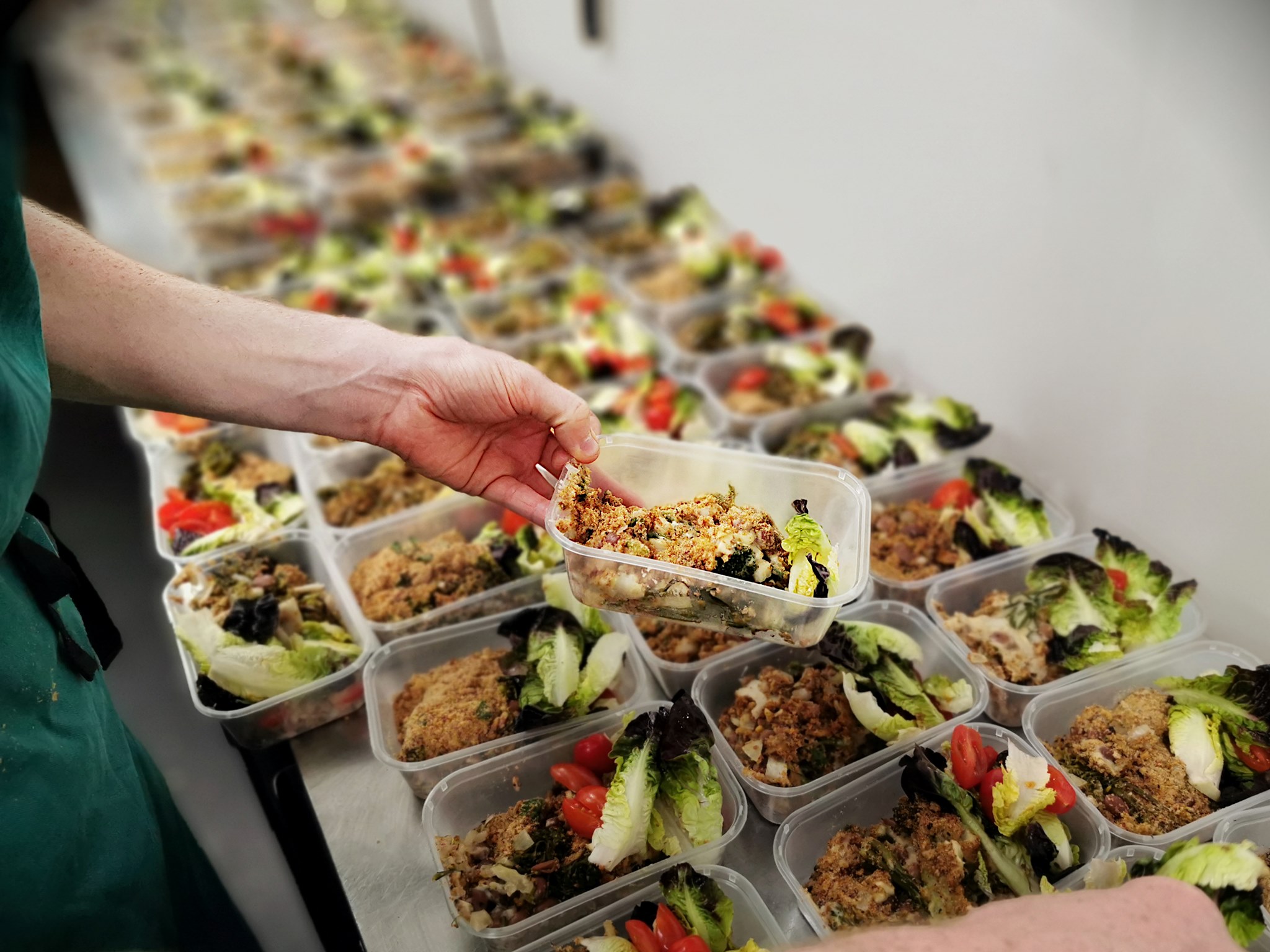 At the start of the pandemic, mutual aid achieved a meme-like quality—with groups being started across the UK for collecting and delivering food and undertaking pharmacy visits for those self isolating. However, these groups were created in a structural vacuum. Co-operatives or longer-term planning were not widely adopted measures by the mainstream because they require a level of forethought and understanding of democratic governance. Activity in the mutual aid groups nationwide tapered off after the first few months of the pandemic even though conditions of poverty, difficulties with shopping, and managing isolation persisted for many.

Early on, hundreds of thousands of people, if not millions, were actively engaged in mutual aid one way or another. Existing grant funding streams, along with very generous donations from the public, were diverted towards mutual aid efforts and new networks that had sprung up. However, despite increased access to funding, mutual aid networks found their transformative potential undermined by the liberal subjectivities of many volunteers, who adhered to the dominant understanding of “charities” . This often resulted in a lack of understanding of democratic forms and the unchallenged creation of internal hierarchies, a materialistic and utilitarian view of mutual aid, and a disregard of broader structures of oppression and inequality.

In forming Cooperation Birmingham, we wanted to challenge this latent liberalism in the movement by articulating an emergency response that was politically loaded and able to put the common good at the centre. Some of our members had been learning from the tradition of mutual aid self defence which began in the US with Hurricane Katrina. Participants in Coop Birmingham were also informed by previous experiences in the co-operative movement and radical political organisations. With this background, we conceived Cooperation Birmingham around commoning ideas, including values such as solidarity, care, and direct democracy. Our aim was to embody these values in the everyday practices of the organisation.

We understood that mutual aid would allow people to interact with each other in a fashion not mediated by the typical charity dynamic of “philanthropic donator” and “vulnerable person”. Instead, an open and democratic structure could carve a path between the two in order to build power in our community. However, engaging new participants who had good intentions, but were not interested in participating in collective decision-making, proved quite challenging. We organised a series of feedback meetings in order to create a common-ground for discussion, where this apparent clash of subjectivities could find a collective resolution. It worked to a certain extent. The feedback meetings encouraged a couple of participants in the daily operations to start attending the assemblies and getting involved in the decision-making processes of the organisation. However, with the pandemic, conditions getting worse day by day, our energies were absorbed by the daily operations of the kitchen and we disregarded the task of building a common ground between the different subjectivities present at Cooperation Birmingham.

The harsh pandemic conditions meant that all onboarding of people doing cooking and delivering was carried out online and it was sometimes a struggle to politicise new participants around the principles guiding the organisation. It also posed problems when engaging meal recipients in the process. The model we chose—hot meals delivered direct to the door—was good because we had the infrastructure available in the Warehouse Cafe, but it also played a part in reinforcing the division between participants and recipients, something that we hoped to overcome by inviting open participation. But this only rarely transpired. There was a food recipient who wrote an article for the Cooperation Birmingham newsletter, and another who started regularly contributing with backroom shifts. But these seem mere anecdotes which, in fact, didn’t translate into engagement in the decision-making processes.

One of the seeds that was to become Cooperation Birmingham was the Birmingham Social Reproduction group, in which several members participated. The aim of the group, which was formed mostly by men, was to release women of their caring responsibilities so they could engage in politics and build a culture of solidarity among social movements in the city. This included cooking meals and providing childcare for the Women’s Strike and an associated educational project, and also cooking for the kids’ Climate Strike movement and other strikes in the city. We understood that for struggles to grow they are reliant on temporary care structures that blossom to support them.

Similarly, we could see that for self-organised structures to last, it is necessary to address the issues in a way which isn’t purely spontaneous, but that is, rather, carefully considered and has broader buy-in from across the city. We took inspiration from the work of Murray Bookchin’s libertarian municipalism and also the direct democratic practices of the Rojava Revolution and the commune model there. This model is familiar to members of our group involved in Rojava solidarity structures here in the UK and from the experiences of comrades who traveled as international volunteers to contribute in the civilian structures in Rojava.

The vision we had initially for Co-operation Birmingham was to initiate the project through a process of social investigation—understanding how the project could work best to support others in the city, but also how it could navigate the difficulties of co-option into state infrastructures and charitable working models. However, due to speed at which we had to act, this hasn’t yet been possible. But drawing on shared experiences of grassroots organising in the city, and the demise of the ‘Corbyn moment’ around electoralism, we were able to determine that there was room for the organisation to grow roots.

We are building the foundations for Coop Brum to consolidate into a structure following the principles of democratic confederalism, in which autonomous projects are integrated into a bigger organisation (secondary cooperative), and also into a broader vision of coop development and support. In this way structural issues like payments, governance, and institutional knowledge can be shared between the projects, not siloed in each individual co-op, and cooperative projects can be linked together to create self-reinforcing benefits. The confederated model needs to create mechanisms that ensure a flow of power from the bottom up, in which the guiding principles of the whole organisation are collectively decided by the autonomous projects. Importantly, though, collective agreements need to be respected by all autonomous groups, and there need to be tools for the whole organisation to enforce them. 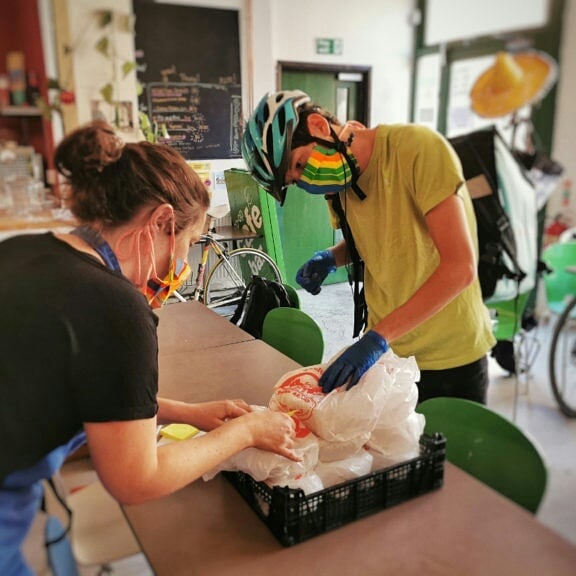 The transition from crisis relief to confederated model has not been easy for Cooperation Birmingham. With the benefit of hindsight, we are now able to recognise a series of critical mistakes that could compromise the future of the organisation. In fact, even if we always worked with a long term vision in our minds, we unconsciously prioritised the short term success of the organisation. This is mostly visible in the focus on the daily operations, which led us to disregard the democratic engagement of new participants. As mentioned above, this created a polarisation inside the organisation between a core group of previously politicised organisers, and a group of participants with generally liberal subjectivities. The consequences of this divide are still playing out in two ways.

The transition is still ongoing in Cooperation Birmingham, but we have already learnt a very important lesson relevant to all self-organised horizontal organisations. Institutions of the common are not just made with material resources and infrastructures, they need people able to collectively manage them. Radical municipalist politics have two main dimensions. First, fighting for the material capacity that allows us to establish alternative modes of social reproduction. And second, building a culture of participation in which the majority of the population feel encouraged to engage in direct democracy. Our experience with Cooperation Birmingham has taught us that we should not prioritise any of those dimensions, since they work simultaneously and reinforce each other. It’s not just about «seizing the means of production», we also need to co-produce alternative cosmovisions that liberate us from capitalist common sense and normalise horizontal relations based on mutual aid, cooperation and solidarity.

All photos by Sebastian Mikolajczak.