Home » Magazine » The making of a movement: Greater Manchester against the housing crisis
Magazine 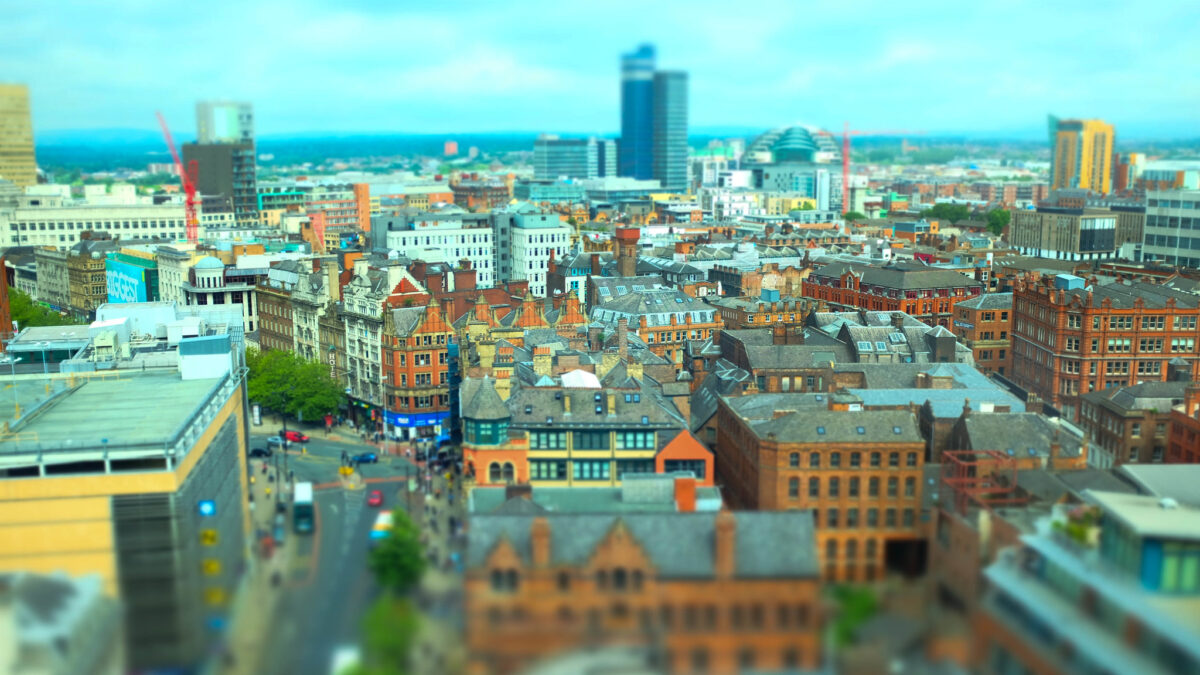 In the thirteen years since the financial crisis, one of the more dynamic political forces in Britain has been its right-to-housing movement. While initially mobilising specific campaigns against austerity and welfare cuts, the movement has more recently begun to develop longer-term organisational forms and advance its own political agenda. The most crucial organisational innovation has been the appearance of tenants’ unions – whose development and prospects are worthy of serious analysis in their own right, and as a promising basis for political organising at the municipal scale.

The movement has been subject to a number of studies taking stock of right-to-housing organising across Britain – from London and Brighton to Liverpool and Glasgow. One place that has received less attention has been Manchester.

This article does three things. First, it provides a brief survey of Greater Manchester’s housing movement, situated within the specifics of the local political economy. Second, it considers in greater depth the role played by Greater Manchester Housing Action (GMHA), of which I’m a member. Finally, it situates this work within the global right-to-housing movement and traces connections with municipalism.

Greater Manchester is a conurbation in northwest England home to just under three million people, spread across ten boroughs around the two conjoined cities of Manchester and Salford at the core of the city-region. The world’s first modern industrial city – reflected in contemporary city branding as The Original Modern – at the forefront of textiles and engineering driving the Industrial Revolution, Greater Manchester experienced dramatic deindustrialisation from the 1970s onwards.

In response to this historic change, local leaders – particularly in Manchester itself – shifted to an urban entrepreneurial economic policy from the late 1980s onwards, seeking to attract inward investment into real estate, and reorienting the regional economy towards consumption and services.

This transformation was driven by a ‘narrow governing coalition’ of political and economic interests. At the core of this coalition was Manchester City Council’s leadership – under Richard Leese (Council Leader, 1996-2021) and Howard Bernstein (Council Chief Exec, 1998-2017) – whose power rested upon well organised factional dominance within the Manchester Labour Group of councillors, and thus Manchester Town Hall, projecting power across the wider city-region.

A quarter-century in the making, Manchester’s entrepreneurial model has resulted in uneven development across the city-region – spatially distributed between poorer outer boroughs and a financialised and gentrified city-core, and a pernicious housing crisis. Out of this crisis has emerged a robust political challenge to the hegemony of the city elites, grounded on the terrain of housing and pointing a path towards – and inspired by – a municipalist political alternative.

The city’s right-to-housing movement is a diverse ecology of organisations, featuring different degrees of politicisation. Tenants’ unions such as ACORN Manchester and the Greater Manchester Tenants Union are the most important insofar as they channel specific struggles into a long-term membership organisation. However, other organisations play important roles too: from the Greater Manchester Law Centre to squatters and tent cities (highly prominent in the city in the period 2014-8), homeless support charities and service providers, social housing Tenants and Residents Associations, and residents campaigns against developer proposals for land use. There is also a range of crucial allied organisations: the Trades Councils, trade union branches, the Labour Left caucus, members and elected councillors, the Climate movement, and local progressive media, such as The Meteor.

Within this growing assemblage, one specific organisation – Greater Manchester Housing Action – has emerged to map and research housing alternatives, analyse the totality of the housing crisis, connect up local struggles at the city-regional scale, campaign for supportive policies, and catalyse the further development of this emerging ecosystem for democratic affordable housing.

GMHA was established in October 2015, at the initiative of a handful of trade union and community organisers based in Manchester and Salford. The impetus was threefold. First, changes in the landscape of local government wrought by city-regional devolution appeared to offer a window of political opportunity – a chance to disrupt the Leese-Bernstein duopoly – as some powers were transferred to the city-regional level, and a new office of the Metro Mayor with its own democratic mandate created. The mayoral election was a key opportunity to force the issue of housing onto the political agenda.

Second, the housing question in Britain had become increasingly politicised. Campaigns against the Bedroom Tax and austerity, against social cleansing and eviction, high profile tent cities and squats in Manchester in response to rising homelessness, and the politicisation of renters by groups like Generation Rent and Hackney Digs had all contributed to this. Perhaps most crucial of all was the Focus E15 campaign, established in 2013 in east London by a group of mothers facing eviction from their temporary accommodation, who spoke at the launch of Greater Manchester Housing Action.

Third, GMHA organisers were inspired by the Left-municipalist wave sweeping Europe; most prominently in Barcelona, whose city government had been taken by Ada Colau only four months before. From this came two lessons: that the city was a crucial terrain for the Left to fight on, and that the housing question sat at the heart of this struggle.

The initial form of GMHA was based around four working groups on four key areas: private renting, social housing, homelessness, and community-led housing alternatives. While this structure was later changed, it had two major legacies for the organisation. First, it meant that from the start GMHA was conceived of as infrastructure serving a wider movement in the city – it helped the organisation find its function. Second, it embedded within GMHA a tendency towards total analysis of the housing crisis – across all scales and dimensions of the political economy of housing. Interrelations between homelessness, the private rented sector, the destruction of council housing – these were brought to the fore in both analysis and organising.

GMHA’s work since has centred on three key priorities. First, it has acted as an organisational node, connecting organisations and campaigns within the wider movement. Second, it has organised key interventions into the local political landscape. A crucial one came in 2017, when GMHA organised a city-region-wide Mayoral Hustings, centred on the issue of housing and homelessness. Questions from people at the sharp end of the crisis were platformed, offering an opportunity to hold candidates to account. Andy Burnham, the eventual winner, later described the hustings as ‘the most explosive I’ve ever seen‘, in pushing housing and homelessness to the forefront of the political landscape.

More recent interventions include coordinating a campaign against co-living proposals; an open letter calling for the reinstatement of the Manchester planning committee, which was suspended in the initial lockdown; and applying pressure on Burnham to institute a Land Commission, inspired by the Liverpool City Region Land Commission recently initiated by Metro Mayor Rotheram, Burnham’s counterpart in neighbouring Liverpool.

Third, GMHA has taken seriously the work of popular political education to deepen understanding of the systemic drivers of the housing crisis. Examples include a housing financialisation walking tour and using its online platform for critical analysis, reportage and intervention, including pieces on historic rent strikes; legal and economic analyses of contemporary landlordism; the struggles of GRT communities over land; racialised inequalities after the pandemic; exploration of financial interests in student housing; reflections on strategy; and tools to expose the unjust nature of rent itself. Educational pamphlets have been produced too – on for instance The Myth of the Good Landlord.

Underpinning this work is critical research into the dynamics of city centre financialisation, the potential for alternative, community-led housing in the city-region, and the privatisation of public land assets. In the pipeline is a major piece of work mapping the impact of Airbnb and other short-term lets in inner-city neighbourhoods. Taken together, this research has provided a robust basis for campaigning, and forced consideration of these issues across the city. GMHA has come to act as a bridge between critical research in the academy and the wider public – making what would usually be quite niche and closed off conversations more widely accessible.

As an outgrowth of the impetus for municipalism that came from Barcelona, GMHA has maintained an internationalist outlook on the housing question; hosting cross-border discussions on housing movement strategy, publishing dispatches from Berlin on financialisation and the fight for rent controls, and on tenant organising in Barcelona, Dublin and Berlin. An internationalist outlook remains extremely important for housing struggles and municipalist politics alike.

There are clearly many synergies, solidarities, and shared repertoires of contention between right-to-housing and municipalist movements. GMHA has emerged from the local development of the former but could potentially catalyse the latter for Greater Manchester – a city, like the rest of the UK, conspicuously lacking but ready for a democratic municipalism, as we see tentatively emerging in Liverpool, with Beacon’s Municipalist Manifesto, and in Glasgow around Solidarity Against Neoliberal Austerity (SANE). This is the challenge in the years ahead: how to translate the energy built up around Manchester’s housing struggles into a political platform for wider urban transformation.