Home » Magazine » Where are the municipalists in the US and Canada?
Magazine 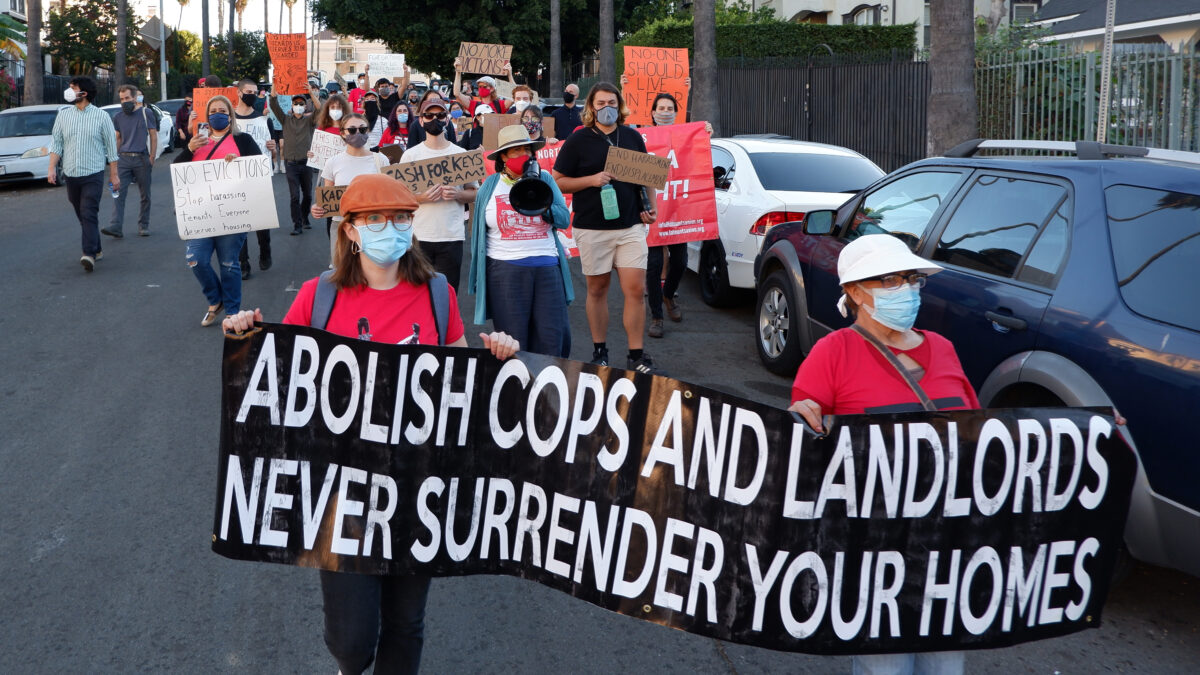 In recent years, the US and Canada have seen a surge of mobilization and interest in left-wing politics and municipalists observing from abroad—especially Europe—have hoped to see the emergence of radical civic platforms like those in the cities of Barcelona, Zagreb, or Bologna. Yet such an emergence has yet to occur. Indeed, at first glance, there appear to be only a handful of organizations leading the struggle for radical civic participation, transformation of cities, and direct democracy. How can this be?

In this article, we explore this apparent lack of a municipalist movement. Although radical municipalism in the US and Canada may seem to have not gained as much ground as in Europe and Latin America, we argue, this largely stems from a Eurocentric model of municipalism itself. Based on our report, The Lay of the Land: Radical Municipalism in the US and Canada, we draw out key social and political dynamics in these two countries and their colonized territories like Puerto Rico that influence their radically democratic activism.

Why focus on the US and Canada and their colonized territories rather than North America as a whole? We chose to do so partly because of our background and familiarity with their movements, but also because of these countries’ positions at the crossroads of many interlocking systems of power. The legacies of settler colonization, imperialism, chattel slavery and racialized caste-like systems that dominate US and Canadian politics complicate ideas about “the city” and “citizens” that are critical to municipalists. And as we consider how and why US and Canadian movements unsettle expectations, we see that their respective experiences have much to teach municipalists, especially in Europe, but also globally, about how to cultivate stronger, more diverse movements.

“Citizenship” in a system of racial apartheid

Struggles against colonization and racial apartheid indelibly shape and indeed even define contemporary politics in both the US and Canada. Racialized injustice is deeply inscribed into the geography of towns and cities, excluding people of color from democratic participation and access to citizenship—even in regions and cities we think of as progressive. For example, northern states in the US had abolished slavery before the Civil War, but they maintained “sundown towns,” where local law criminalized the presence of Black people in public after dark, well into the 1960s. Such discrimination also appeared in the form of “red lining”, a practice whereby banks refused loans to Black and Latino families in neighborhoods they sought to reserve as white and therefore affluent. Indeed, suburbs themselves were established to appeal to well-to-do, car-owning whites who sought to “escape” the urban centers as Black and Latino families moved in as factory labor.

The very institutions of local governance that municipalists rely on were weaponized as tools of segregation and gentrification. Municipal and neighborhood councils had the authority to divide schooling and housing, further excluding families of color from democratic participation and access to citizenship. To this day, neighborhood associations, school boards, and local councils in white-dominated jurisdictions are sites where racist whites viciously defend “their” town’s whiteness. Municipalists seek to empower neighborhood organizations and city councils, yet in the US and Canada, these very organizations were established through collective self-determination among whites as a means to prevent integration.

In Canada, which abolished slavery in the late 18th century, Black refugees settled in cities such as Halifax, where they founded the historic neighborhood of Africville. However, there too they were subject to racist municipal policies, and did not receive basic infrastructure while industrial waste was dumped on their land. The municipality eventually forcibly evicted all residents in the 1960s. Segregationist policies are similarly part of the history of Canadian cities, despite their liberal veneer.

Municipal governance has historically also been anti-Asian. In both countries, Chinese and Japanese labourers built much of the infrastructure like railroads, but these communities too were afforded little rights or power to engage in local politics and pushed to segregated neighborhoods. Both the US and Canada interred Japanese people during the Second World War, even though most were full citizens. When apartheid lies at the base of a colonial system, it can revoke basic rights even of those who built its foundations.

There is not a singular, straightforward relationship to “the city” or municipality in systems of legally-coded racial apartheid. People who are Black, Indigenous, or descendent from the colonized world experience a relationship to the city or municipality different than the white subject of the body politic. As Harsha Walia shows in her book Border and Rule, imperial dynamics are replicated today in the refusal to grant the rights afforded to citizens to temporary and undocumented workers, emigrating from conflict zones. Once again, those who build the system and are essential to its functioning are categorically excluded from its political machinations. This impacts not only people’s relationships to ostensibly “public” space and land, but also their perceptions and expectations of local governance. Municipalists are thus left with the challenging question of how to prevent replicating a white-dominated body politic—even as they may be guided by radical municipalist intentions.

These racist histories appear to give all the more reason to radically democratize the local governing institutions in question. However, on stolen land, the rift runs even deeper as the establishment of Western, European-style municipal governance via war and genocide also entailed the criminalization of Indigenous tribal democracy. In 1876, Canada made this explicit via the Canadian Indian Act, which outlawed traditional tribal decision-making by consensus, characterizing these egalitarian practices as “irresponsible”. The colonial nature of municipal governance in the US and Canada undermines the legitimacy of their very existence.

Indigenous resistance movements prioritize direct democracy, federations, and the egalitarian principles which municipalists most cherish. Indigenous activists position these philosophies and practices not as “new” experiments, but rather as a reassertion of pre- and non-colonial forms of autonomy and self-determination. The meaning of both democracy and decolonization is thus deepened, suggesting that they may in fact be constitutive of each other.

The framework of decolonization is appearing in a growing number of diverse contexts, such as in colonial territories like Puerto Rico, Indigenous-led anti-pipeline resistance, and Southern Black movements and cooperatives. Decolonial perspectives on municipalism are being developed in organizations like the ARIDDSE and Black Socialists in America. Social ecologist Modibo Kadalie addresses these themes in his essay collection Pan-African Social Ecology, exploring how self-emancipated Black communities along the Gullah-Geechee coasts of Georgia and South Carolina allied with Indigenous peoples in their rebellion against the fledgling United States and practiced similar forms of direct democracy—drawing not only from North American Indigenous traditions but also African traditions as well. Projects like Cooperation Jackson, the People’s Movement Assembly, and Project South are as a living inheritance of the centuries-old Southern tradition of anti-colonial resistance and self-governance. Direct democracy is thus hardly a white, European or even ancient “Greek” invention, but rather a vast realm of political practices that colonization has tried—but ultimately failed—to destroy.

In the US and Canada, poverty and overwork present some of the steepest barriers to a popular municipalist movement. Collective (de)liberation among communities at the grassroots level is meaningless without the participation of all people within those communities. Yet extreme economic precarity, social instability, and political inequality in these countries creates a hostile environment in which it is extremely difficult to sustain a citizen’s platform or party without traditional top-down forms of funding.

For this reason, economic democracy, material self-sufficiency, and wealth redistribution have been a key goal of Black-led grassroots struggles for local democracy. These projects often trace back to Black nationalist and Marxist traditions, but they also have strong roots in radical Southern community organizing, the Civil Rights movement, and the Black-led farm cooperative movement. The municipalist project of Cooperation Jackson, emphasizes relationships between organizations, such as between farmers and city-dwellers, between the unemployed and those who can provide important goods and services, as well as community control over land and resources.

Horizontal social movements driven by middle-class white leftists tend to define “democracy” by virtue of procedures and decision-making processes. But the economic democracy movement teaches us to attend carefully to who is (and who is not) in the room.

Histories of genocide, dispossession, and imperialism create a markedly fragmented situation not only economically, but also culturally.  Like few places on Earth, daily life for people in the US and Canada is confined by the automobile, suburbia, policing, and a general atmosphere of alienation and artificial scarcity. In this context, social movements are confronted with a wide array of structural, intersectional systems of power in their day-to-day organizing. But struggling with these issues also leads to a certain amount of creativity.

We discuss this creativity in more detail in our report, The Lay of the Land: Radical Municipalism in the US and Canada. We also describe the key events that have led to the current municipalist conditions in these two countries, pointing out six important “nodes” of municipalism: economic democracy, social ecology, municipal socialism, tenant organizing, mutual aid organizing, and Indigenous resurgence.

Radical municipalism in North America is still a nascent movement. Some of the movements aligned with municipalism may never become a democratically coordinated force. Nevertheless, we can look at their commonalities and see an aligned sensibility and framework for action. But to understand their potential, it is critical to have a multivalent understanding of municipalism which accounts for divergent yet overlapping cultures, languages, and intellectual lineages. The very “incoherence” for which US and Canadian municipalists are criticized is a sign of a evolving movement grappling with historical problems on a civilizational scale.

We wish to thank Francisco Dominguez for his edits and feedback.