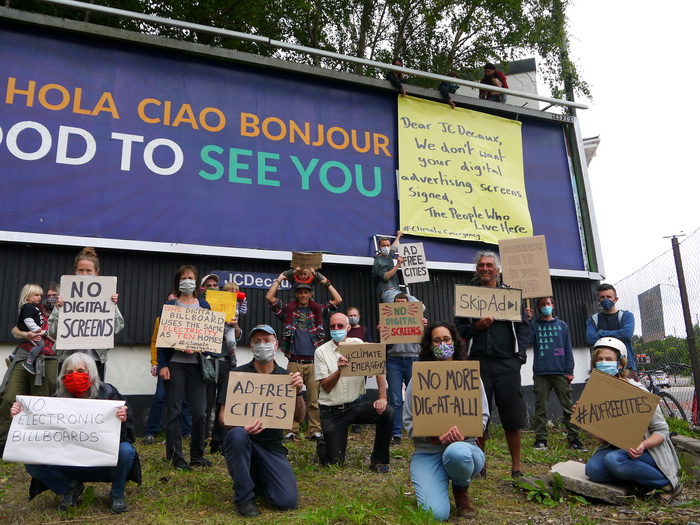 “Adblocking is about democratising the city. Big companies and the commercial interest overdominate those spaces and our social relations over the last decades in a system of consumerism”, Robbie Gillett, a co-founder of Adblock Bristol explains. “By organisers getting together to take down and stop digital advertising screens we are calling for a different set of priorities for the urban visual realm, where residents and communities find their own power.”

Adblock Bristol was founded in 2017, organising a national conference in 2019. Since 2019 local Adblock groups have sprung up around the UK, working within the Adfree Cities network that officially formed last year.

Challenging outdoor advertising has pulled together activists from different areas, explains  Carla Denyer, policy and communication coordinator at Adfree Cities. For example, as advertisements perpetuate stereotypes about how one should look, there are feminist and body positive activists involved. Denyer continues: “There is also a strong equality angle, a lot of outdoor advertising screens are in more deprived areas. People who already have it harder in other aspects of their lives are bombarded with messages to buy this or that to be a good person. Advertising entrenches inequality.”

Numerous studies (and books) show outdoor advertising comes at a high cost, to individuals’  mental health, societal well-being and ecological health. This makes challenging corporate ads a movement multiplier. Anti-gambling activists, environmentalists and anti-racists are some of the other groups resisting the corporate colonisation of our cityscapes and minds.

The anti-advertising movement collectively reimagines the public space and urban commons. It offers a way to build a different economy and politics beyond the systemic crises we are facing, as it makes global issues tangible and boosts local autonomy. Want to challenge climate change? Why not challenge corporate greenwash on your street.

There are also strong parallels to municipalist methods and aims and strong potential for collaboration. Adblocking also works both inside and outside local institutions, empowering communities and aiming to change local public policy.

This century the urban movement against billboards has grown: Sao Paulo in Brazil banning outdoor advertising in 2006 was one milestone. Advertising has been restricted from Tehran to New Delhi. In 2014, the Green mayor of Grenoble cancelled a contract for 326 outdoor advertisements – including 64 large billboards – to be replaced by trees, community noticeboards and views of the Alps. 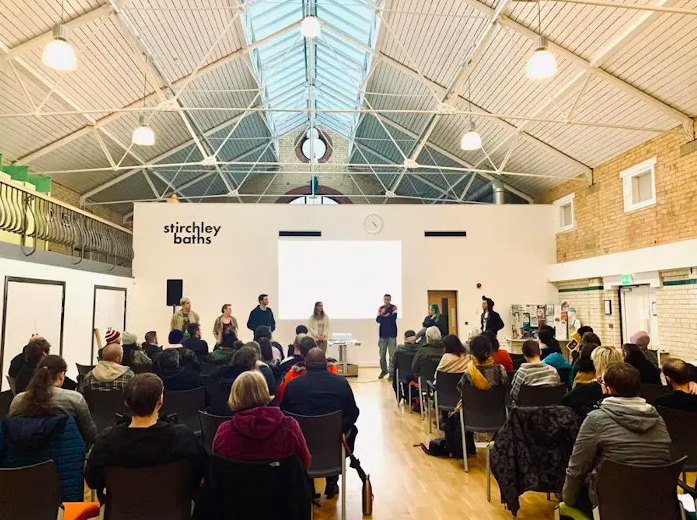 New Adblock groups across England and Wales are blocking new digital billboards from Cardiff to Birmingham, Exeter to Leeds. I ask Gillett about Bristol, the furthest along. “We have stopped 30 large digital advertising screens. After pressure from residents, Bristol City Council are coming around to the idea they need a planning policy around [restricting] advertising. But this task requires further pressure from Bristolians.”

The council is currently considering a new advertising policy which would ban certain types of adverts from council-owned billboards. Adblock Bristol is lobbying the council for the ban to include junk food and high-polluting products (e.g. SUVs), and councillors have so far seemed receptive. After a petition and pressure in 2018, Bristol City Council also shelved potential plans for billboards in its parks.

Pressuring the council administration is one of the four strands of Adblock groups’ local work. A second is showcasing alternatives: what do we use this space for instead? Adblocking leads towards questions about real local democracy. In the neoliberal city there is no alternative: adverts are ubiquitous, challenging their existence is beyond the realm of imagination. The only space for imagination is about consumption, at least on the face of the city. Blocking adverts raises the question of what should we have in the city instead, what different things could be in the public space, which is why showcasing alternatives is an important first step towards local democracy, when it comes to our cityscape.

‘Holding the line’ – a third aspect – is about making mass objections to blocking new billboards in the planning stage, especially energy intense digital screens. “This is a slightly individualised task, residents responding to a bureaucratic process, but frequently within six weeks it creates an empowering win. It’s an Eureka moment for many. People often sign petitions without impact, and it is easy to feel on the back foot after 10 years of austerity – so stopping a new billboard feels really empowering.” Gillett explains.

New billboards, like any other new or modified infrastructure are legally subject to a planning process, in the UK, whereby councils offer residents the chance to make planning objections. Councils then might take these into consideration and halt the plans. Blocking adverts via planning objections, reveals current deficiencies in local democracy. Corporate advertising is unpopular. Yet the planning process to resist it is rarely utilised, just as the multitude rarely engage in other dry and lengthy public consultation exercises. To overcome this, adblocking mobilises people to jump through the bureaucratic hoops on mass.

The fourth strand is movement building. Examples where the Adfree Cities network is collaborating include against skywriting (advertising from planes), gambling, targeted advertising towards children and against car culture and high-carbon products, which ties to right to the city. 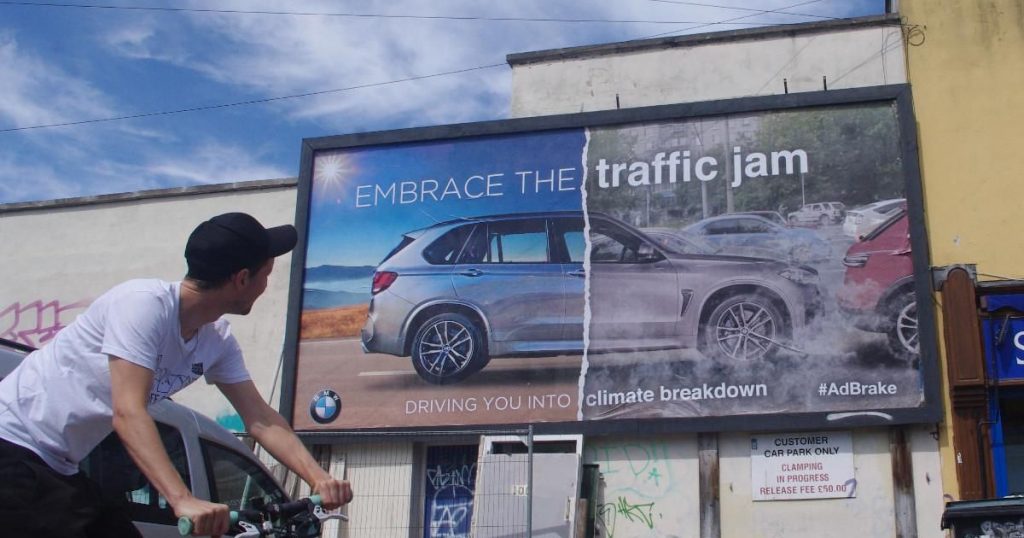 Not only does blocking adverts segue many causes. As corporate advertising is both unpopular, but broadly unquestioned, this also lends itself towards different tactics being symbiotic. Any challenge helps.

Another way of showcasing alternatives is subvertising: when a corporate advert is replaced or altered, its message twisted with artistry, often humour. This is both showcasing alternatives, but also taking direct political action – a counter strategy to appealing to the powers-that-be, say through planning objections.

Unlike much activism, subvertising is something that can continue safely during Covid-19. In November 2020, the subvertising collective Brandalism covered-up over 250 adverts in 10 UK cities revealing HSBCs ‘climate colonialism‘.

Tona Meriman from Brandalism tells me how subvertising and adblocking work together: “Subvertising is really creative, empowering, direct and fun for activists. But there are limitations. Even if you get a big press splash or social media uptake of the actions eventually the billboard company replasters the art with ads and business as usual continues. Adblocking is a more long term tactic to institutionalise the critique of subvertisers, taking those critiques to a municipal level.”

The sheer unpopularity of advertising means adblocking and subvertising enforce each other,
as any anti-advertising action questions something frequently hiding in plain sight. This also
lends itself towards a movement where people can take autonomous actions, with less tension
between one tactic (e.g subvertising) coming at the expense of another (e.g planning objections). Something often common in other forms of social campaigning and activism. This autonomous thread ties neatly into the movement’s wider goals of a cityscape determined by the people. In its means adblocking works from a collaboration of people taking self-determined actions, that feeds towards a goal of a self-determined city of neighbourhoods.

It can also be undertaken by those on the inside. As well as working at Adfree Cities, Carla Denyer is also a backbench Green Party Councillor in Bristol. She introduced the first Climate Emergency Declaration ratified by any European city. This led to Bristol setting a 2030 zero carbon emissions not only for the council’s, but for the city and its inhabitants’ consumption. Its subsequent policy – One City Climate Strategy – includes the call to create “advertising standards and restrictions to support responsible consumption.”  The task for Adblock Bristol is to turn these intentions into reality.

More broadly Denyer reflects: “I think the idea of councils declaring the climate emergency is aligned with the idea of municipalism, as the whole idea is about local authorities making that declaration regardless of what national governments are doing.”

In December 2020, the city of Amsterdam banned fossil fuel adverts, pushed by a coalition of 51 local organisations. Similarly, Transport For London banned junk food adverts from the London’s buses, underground and overground in late 2018. These precedents show how local governments can make decisions. Denyer tells me that often one precedent somewhere will push other councils to follow, as happened across Europe after Bristol declared its climate emergency in November 2018.

The Adfree Cities network of local groups is gaining momentum, addressing global issues in radically transformative ways, despite the challenges of Covid-19. Looking forward one radical aspect of it is how it is not prescriptive, it questions the neoliberal city without answering what should replace it. The network was founded on the principles of creating happy healthier cities where neighbours claim creative control.

“One street artist said a bus stop is a far better place for art than a gallery as everyone can see it,” Gillett tells me, explaining Adblock Bristol often highlights art as an alternative. But the alternatives are broad, other neighbourhoods might choose anything from community noticeboards to benches, celebrating heritage to unveiling architecture.

In 2020 the national Adfree Cities conference explored people reimagining their cityscape with socially positive measures. They featured a #BlackLivesMatter murial trail in Scotland, curated by Wezi Mhura, with 37 anti-racist pieces of street art showcased across Scotland, alongside other projects including #WhoseFuture campaign where over 370 artworks were exhibited on the streets of Bristol by 37 young artists tackling themes from racism, inclusion to climate disaster.

Epitomising how adblocking can take big issues and make them tangible on the local scale, Adblock Bristol members have also formed a local BS3 group in Bedminster and Southville, two southern districts of the city. Here, as elsewhere in Bristol, the group has incentivised people to think about alternatives, replicating the tactics used across the city but in one area. These have included covering up adverts in the street with flipchart paper, asking a question to all the passersby and hanging pens. Questions such as ‘what do you want BS3 to look like?’ Another local strategy is surveying residents to find out what people think of advertising and what should replace it.

I see adblocking relating to municipalism as it relates to people collectively imagining a city breaking down corporate control and other power structures. But perhaps it is more useful to consider how municipalism and adblocking could be symbiotic.

To realise a city that the multitude defines, whilst challenging the dominance of power structures with corporate advertisers, politics needs to be done differently.  This is one strong reason for adblockers and municipalists to work together. Furthermore, both involve a wider struggle about imagination and realising that there are alternatives to the neoliberal city. 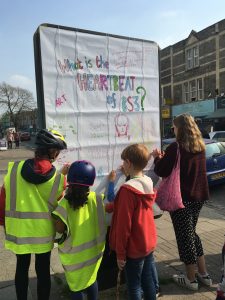 Call for reports - municipalism and the common