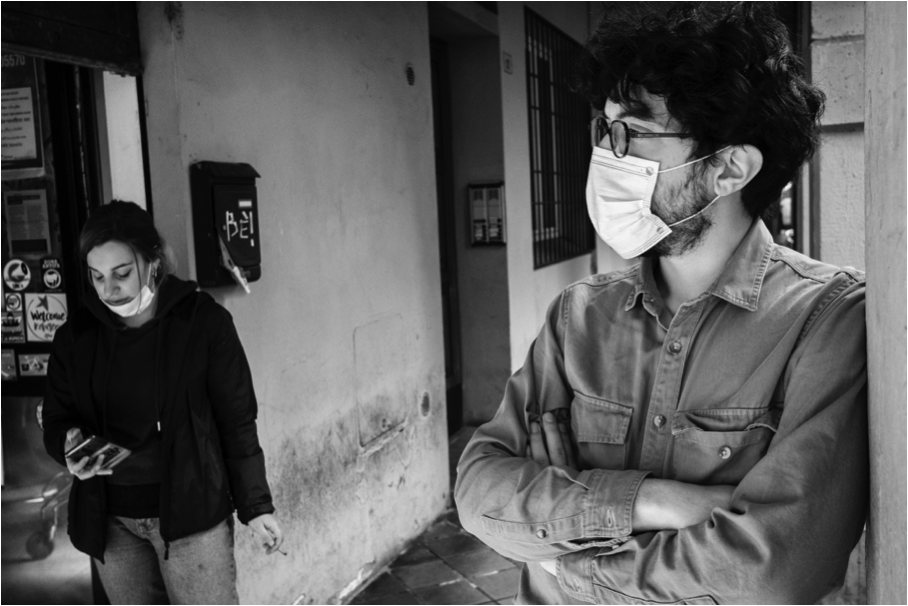 The deadly outbreak of COVID-19 in Italy marked a turning point in the global conversation about the pandemic. When the disease first emerged and spread throughout China, people in powerful western countries found it easy to dismiss the threat. But by late February, news of a serious outbreak in the wealthy, Northern Italian region of Lombardy forced a sobering revelation: if a major Covid-19 outbreak could happen in Italy, it could happen anywhere.

By Tuesday, March 9, then-Prime Minister Giuseppe Conte declared the entire country a “red zone”. Every excursion from home had to be validated by an autocertificiazione, a signed self-declaration of a legally valid excuse. Lockdown infractions could — and did — result in heavy fines. Groceries could be purchased once a week. As supermarkets drastically limited the number of clients admitted at a time, one often had to wait in a queue snaking outside. Often with a Red Cross supervisor outside. Despite these extreme measures, in just a few short weeks, over 30,000 Italians lost their lives. Many thousands more of course were sickened, traumatized, and permanently injured. As of this writing one year later, that number has reached over 117,000.

Within these previously unfathomable conditions, there are crucial lessons to be learned by social movements about crises and local governance.

While it will take years or even decades for public health experts to compare and understand why and how some cities were hit by Covid-19 harder than others, different trajectories are undoubtedly determined in part by a city’s response. It matters who is in power, how power works, and what they choose to do. The experience of Covid-19 in Italy points to the importance of local government as a site of organizing before disaster strikes.

“Milan doesn’t stop”: what not to do

Lombardy’s capital, Milan, was the first metropolitan hotspot in Italy. The response of the region’s far right-led government is a case study in what regional governments should not do at the onset of infectious disease. When news of the local outbreak first hit, the mayor’s office not only failed to issue appropriate education materials and public health warnings, it actively minimized the gravity of the situation with a public campaign “Milano non si ferma!” (Milan doesn’t stop!) to entice shoppers and tourists back into the city’s dense city center and fashion districts.

Milan is one of the biggest and richest cities in Europe, yet the work of helping its most vulnerable inhabitants fell on the shoulders of “persone solidale” — people of solidarity. One major mutual aid project, the Brigata Lena-Modotti (Lena-Modotti Brigade), organized over 200 volunteers to collect food, medicine and supplies at a local social center and made sure these items arrived to families. As the crisis ballooned, they soon began providing phone-based consultation services for workers, women, and families confined to their homes.

For such people struggling on the front lines, the city’s pro-shopping campaign added insult to injury. In the words of one young organizer of the Lena-Modotti Brigade,

“Milano non si ferma! made it seem that all would remain the same — that nothing would stop, not fashion or the city’s economy — so the information [about Covid-19] didn’t arrive to people. For all of this, there were more cases. It created chaos.”

Like those in many other cities of the world, Milan’s courageous mutual aid organizers witnessed the lowest classes paying for what the government was unable to do. She continues,

“The experience of the brigades must be an impetus for reflection by everyone about all of the struggles we’ve fought until now” my interlocutor emphasized. “Over the years, the state has taken everything from us, yet it has been totally absent during this moment of emergency. Only the work of solidarity has helped the poorest people.”

When city governments abandon the people, the people have only themselves on whom to rely.

But what if the people came after city governments first?

The presence of an organized municipalist movement in Bologna allows us to study what a municipalist crisis response could look like.

For the last four years, municipalists in Bologna have been organized into the citizens’ initiative Coalizione Civica di Bologna. Coalizione Civica mobilizes around urban ecology as well as women’s, worker’s, and migrant issues. Coalizione Civica is more than just a local party with a platform. It has worked to activate ordinary people as active citizens, exploring their rights and desires for decision-making power. It approaches the city as a realm of experimentation, a collective “possibility space”.

Coalizione Civica have a small foothold in city governance. In 2016, they ran and gained two representatives elected to the role of municipal deputy [consigliere communale]. Their position, in the words of consigliere communale and anti-discrimination law student Emily Clancy, is that of “governing from the opposition.”

Local and regional politics in Emilia-Romagna reverberate beyond the region. In 2019, hotly contested regional elections saw the center-left Democratic Party beat back the far right Lega Party, delivering an important defeat during a moment when the far right was growing rapidly across Europe. The victory stood out because of symbolism of the city itself. Bologna — with its long history of radical leftism, trade unionism, and student organizing — would have been a major prize for the far right.

Under ordinary conditions, social movements thrive on spontaneity. But because of Italy’s strict lockdown — and because of the novel, highly infectious and stealthy nature of the disease itself —spontaneous mobilization became virtually impossible. The difficulty of coordinating mutual aid projects was no straightforward matter of courageous activists resisting a repressive government. “You couldn’t just go out and kick a ball around.” As one organizer put it, “I’m not saying that because I am a fan of the authorities, but because you could really endanger others”.

When Covid struck, social centers and activists across Italy were poised and ready to help, but they were forced into the impossible position of violating critical public health ordinances or doing nothing at all.

That’s where municipalists came in. The two consiglieri (councilors) from Coalizione Civica were able to leverage their positions to secure special certifications for mutual aid volunteers to do their work without getting stopped and fined by the police.

While Coalizione Civica’s representatives secured critical authorization, activists across the city organized a campaign, “Don’t Panic! Organizziamoci! [Don’t Panic! Let’s Organize] which rapidly grew to include over forty organizations, associations, and committees alongside individual volunteers. Barriers like ideology or past feuds seemed to evaporate overnight as participants ranged from Catholic priests to anarchists and sex worker unions. Together, they worked under principles of “mutualism, information and solidarity”.

With the success of this first initiative, Coalizione Civica’s municipal deputies were again able to help “unlock city hall” by facilitating a patto di collaborazione (collaboration pact). This is a kind of civic contract dating back to the Middle Ages. Groups of citizens — autonomous, self-organized — enter into the pact as an equal entity with city government. The social movements, in other words, gathered collective power that the city then had to acknowledge. Through mutual aid, they were able to push for city accountability in a way that seems all but unfathomable in our world today.

Don’t Panic! succeeded because created an entire ecosystem of social movements who had already paved a path of access to the power of the city’s political institutions.

When I last spoke to the Leena-Medotti Brigade last spring, they too were beginning to seek out a collaboration pact.

What happens when we embrace the contradictions and tensions of working both outside and inside local governing institutions? How might we tinker with institutional tools and repurpose them toward to transformative change?

COVID-19 has laid bare society’s deepest and most longstanding inequalities. The state willfully failed or chose to abandon the very people it claims as citizens. In response, mutual aid networks have popped up across the globe – from South Africa [Cape Town Together] and Northern Syria [Rojava] to Latin America and North America/Turtle Island.

This kind of triage organizing is necessary, meaningful, and powerful. It is important not to over-determine crisis moments when people “take lifesaving action born out of necessity”. A recent publication by the Kairos Center argues that “As long as this crisis rages, there will be people who do the necessary work of triage, of meeting immediate needs in the present, and this work is critical.” Yet it remains to be seen whether these organizations can leverage consistent political momentum.

Don’t Panic’s ability to draw together such unlikely allies strikes directly at the heart of what makes municipalism both promising and unique: You don’t need to belong to a party or ascribe to a particular ideology to participate in a municipalist movement. You simply have to act as a citizen in solidarity with your neighbors. And through that collective action, you are drawn into a political understanding based on solidarity, humanism, and shared power.

None of this is to say a municipalist approach has it all figured out. Questions remain. We might interrogate, for example, the possibility or desirability of city politicians settling into the expectation that disaster relief work will fall onto the shoulders of unpaid volunteers.

And while they are unlikely to evolve into direct, revolutionary confrontation anytime soon, mutual aid projects like Don’t Panic! remind people of a sense of civic identity. This could not be more timely as the far right has been monopolizing and weaponizing people’s need for a sense of political belonging. We need more organizations fostering collective civic power with tangible benefits to ordinary people’s wellbeing.

Finally, Covid-19 has also demonstrated the importance of relationships between social and political movements during times of crisis. It matters how social movement organizations relate to one another, as well as how and to what ends they are organized. The atmosphere of urgent crisis brought by COVID-19 has already come and gone in Italy. But the radical civic communities fostered under that crucible of crisis will reverberate into an undetermined future, opening new, unforeseen possibilities.

Sections of this article appear in “Pandemic Solidarity” edited by Marina Sitrin and Colectiva Sembrar, available via Pluto Press, June 20, 2020.