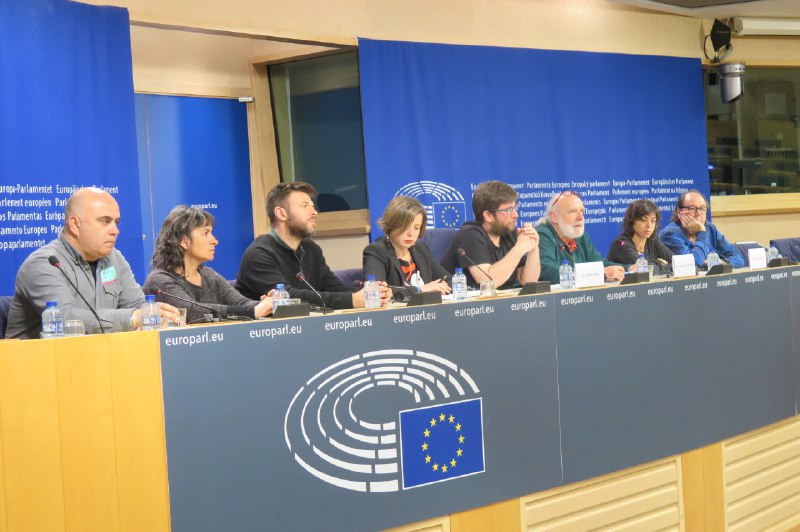 Spain is one of the countries most affected by the 2010 Eurozone debt crisis. To reduce its public debt, the state government implemented budget restraint policies and, in 2012, voted to restrict the budget of public administrations, including local authorities. This “Budgetary Stability and Financial Sustainability” Act was proposed by the Minister of Finance Cristóbal Montoro from the Popular Party. The “Montoro Act”, as it became known, imposed a limitation on public spending for public administrations.

In reaction to the Montoro Act, an activist network was created that tried to show how this act was unfair. The Municipalist Network Against Illegitimate Debt (hereafter MN) argues that the debt crisis was not caused by excessive spending by local authorities, but rather by the bailout of banks with public money, which is, according to the activists of this network, a genuine act of “illegitimate debt”. “Illegitimate debt” is a concept developed by activist networks to qualify the use of public money without guaranteeing that it must serve the interests of the population (we are talking beyond the “white elephant” bank bailouts or interest rates above market levels).

The MN was created in November 2016 by several activists (mainly from the Debt Citizen Audit Platform), but above all by municipal councillors, regional and state Members of Parliament (MPs), and Members of European Parliament (MEPs) from leftist parties (Podemos, Anticapitalista, Izquierda Unida). As a municipalist network, their members meet annually to share municipalist practices, but they also undertake other kind of actions – which is what I will focus on in this article. The network uses specific tactics to be confrontational with the state at different levels (state-wide and EU-wide) in many ways very successfully. In this article, I explain how this strategy, where a municipalist network directly confronts the national government, has important lessons for municipalism as a whole.

Organizing the resistance against the Montoro Act

“We demand a radical change in the policy of financial asphyxiation applied by the Central Government towards city councils and regions ; the repeal of the 2011 reform of Article 135 of the Constitution, that of the Budgetary Stability and Financial Sustainability Act and that of the Rationalisation and Sustainability of Local Administration Act ; the return by the banks of the abusive interest charged, the immediate cessation of cuts and austerity, reversing their consequences, identifying their culprits and compensating their victims. We commit ourselves to support the constitution of a front formed by the municipalities, autonomous communities and nationalities of the Spanish state to challenge the illegitimate debt […]”.

This is an excerpt from the “Oviedo Manifiesto”, the founding document of the network, signed by 600 Spanish elected officials. Its dissenting tone already suggests how it positions itself toward the state. But the MN also has gone beyond such strong statements to act against the national goverment more directly.

The members of the Network met four times between 2016 and 2018. The MN was coordinated by an activist who had no elected position or commitment in a political formation, paid for by some local political platforms (such as Somos Uvieu, Podemos-Sevilla). During the 2018 meeting in Cordoba, which I attended as an observer, there were about one hundred people, including councillors and activists (Ecologistas en Acción, Citizen Debt Audit Platform or the Observatori del Deute en la Globalització). Over three days, seven workshops were held, such as “Financial sustainability with social justice”; “Model of development, infrastructures and public procurement”, “Loans of local entities”, “Integrating a feminist perspective in the evaluation of public policies”, “Making a local audit”, and “For a regulatory framework for local autonomy: demands to the central government”.

As these workshop titles indicate, and as my own observations of the conference confirmed, activists of the MN were full of alternative political propositions to mainstream political thinking: more social investment, fiscal and social justice, citizen empowerment, rejection of institutionalised corruption and municipalism. Yet the MN’s confrontational strategy towards the state also went far beyond these conferences and gatherings, which they accused of “financially suffocating” local authorities.

Acting against the State in the Parliament

During the mobilisation campaign to collect signatures for the Oviedo Manifesto, the MN obtained the support of different MPs in the opposition, such as Sonia Farré, part of the network, Alberto Garzón, and Auxiliadora Honorato – MPs from Unidas Podemos (the third largest political formation in the 2016 general elections, with 71 deputies). Then, on October 19, 2016, Garzón and Honorato invited the Madrid councillor for the Economy, Carlos Sánchez Mato, and other people from the network, to a press conference to present the Oviedo Manifesto inside the Congress of Deputies. During the conference, which was symbolic, with more journalists than attendees, they talked about “reversing austerity policies”, “overcoming the failed model of municipal financing”, “stopping illegitimate debts”, “giving capacity of action to local councils”, “balancing the powers”, and “implementing citizen debt audits to empower citizens”. Here we see typical elements of a municipalist discourse held in the Spanish Parliament. First, MPs and the representatives of MN expressed the need to give more powers to local authorities, and less to the central state. This is justified by parliamentarians and the MN by the fact that the state imposed austerity at the local level, causing a funding crisis for municipalities. In this respect, intervention by the State in the management of local affairs is argued to be illegitimate, leading them to plead for new ways to finance policies at the local level.

In such a symbolic event, some Members of Parliament gave local politicians and citizens a platform to criticise the government – an act direct confrontation. This coalition of opponents to the state government of the Popular Party (PP) offered political and symbolic benefits and contributions for those involved, by strengthening an “advocacy coalition” (as a symbolic front of political opposition between different levels of government).

For the two MPs, the network offers resources to play the role of political opponent between the state legislature and the executive branch. Moreover, the network is a useful ally for MPs in the sense that it is composed of activists who have democratic legitimacy because they are elected at the municipal level. For the members of the MN, the benefits are mainly publicity-related: promoting themselves within the Congress allows them to attract the attention of the media and to give visibility to the social critique advanced by the network through media coverage. On a symbolic level, appearing as municipal councillors in a state political arena makes sense if we remember that the network opposes the central government’s policies. Therefore, going to Congress means that network members can play in the field of state politics, without being stuck in a hierarchical relationship between the state level and the municipal level.

Acting against the State at the EU level

Representatives of the MN also strategically intervened at the European level, thanks to invitations of two Spanish MEPs from Podemos and Izquierda Unida: Miguel Urbán and Tania González. Here, they used a similar strategy: four members of the network were invited to present the Oviedo Manifesto and its demands in the Paul-Henri Spaak building of the European Parliament in Brussels. The second stage of the network’s “journey” to Brussels was the organisation of a debate with MN representatives, moderated by Miguel Urbán, inside the Parliament. The debate was broadcast online by Podemos. Here I quote part of the discussion to understand why activists decided to go to the European level:

Miguel Urbán: It can be said that Montoro has been a nightmare, more than a dream, right? His city councils were indebted by the Popular Party and now Montoro, from the same Popular Party, is imposing his austerity acts on municipalities of change […]. In the end, is it possible to disobey Montoro?

José Téllez (deputy mayor of Badalona, MN representative): I think that city councils alone, no […]. It is difficult to disobey. That’s why we are in Brussels, not because we like to travel to Brussels. We are looking for alliances, for example, with MEPs, to propose real strategies of disobedience to the payment of the debt, to promote budgets that citizens need. We need alliances outside the municipalities and alliances outside Spanish territory. Montoro’s policies are going to have serious consequences, so we cannot only propose strategies from the offices of the local councils. We have to socialise the strategy much more.

Here it is important to understand why the MN representatives made a “jump of scale” to the EU level. Doing so follows the same logic as the MN strategy at the level of Congress, but more ambitious: municipalist activists aim to benefit from the “carrying capacity” of such public arenas (Congress, European Parliament) to publicize their criticisms against the policies of the PP government. From the MN’s perspective, going to Brussels to promote themselves has two objectives: to try to build European alliances around the criticism of municipal austerity (which does not only occur in Spain), but above all to be covered by Spanish media and to put pressure on the Spanish government from Brussels.

Another strategy of the Municipalist Network to intervene at the European level was when Madrid’s Councillor for Economy, Carlos Sánchez Mato, went to Brussels to meet the French Commissioner for Economy, Pierre Moscovici. During an open conflict between him and Montoro regarding the economic policy of Ahora Madrid, Sánchez Mato, as an economist, wanted to put pressure on Montoro through Moscovici. The Madrid councillor complained about the state’s pressure on municipalities, even though some of them had surpluses (like Madrid). Knowing that Moscovici was a “social democrat” (in a Keynesian sense and not so much in favour of austerity), Sánchez Mato provoked a reaction from the commissioner: to encourage Montoro to relieve state pressure on indebted municipalities that had surpluses and to favour more social investments than the legal framework allowed at the time, in order to encourage economic recovery.

Thus, these strategies of the MN illustrate its capacity to use its symbolic and social capital beyond the municipal level. In any case, these actions teach us the importance, when studying municipalist actors and networks, of considering their own relational configurations and how they are promoted at other scales, since the legal and symbolic struggle to impose a municipalist vision is not only developed, as Jose Téllez says in the excerpt, only “in the offices of the city councils”. In fact, promoting and implementing municipalism also involves modifying the state’s legal framework which defines a vertical distribution of powers and a state of possible but limited relations between the state and local authorities.

If the MN’s experience is particularly confrontational towards the State, this example teaches us that a municipalist project is always constrained by a national/federal framework and a certain vertical distribution of powers (between the central level and the local ones). In other words, to understand the possibilities of a municipalist movement, one should not only look at the most local scale. Municipalist movements are not well understood if they are not contextualised inside a political, territorial, and legal configuration. To be consistent with their beliefs, municipalist movements must remake state legal frameworks. In the absence of any possibility to change this legal framework, the MN’s political actions show the possibility for confrontation at multiple scales by municipal movements.