Home » Magazine » Limits of municipalism. What can we learn from Operación Chamartín?
Magazine 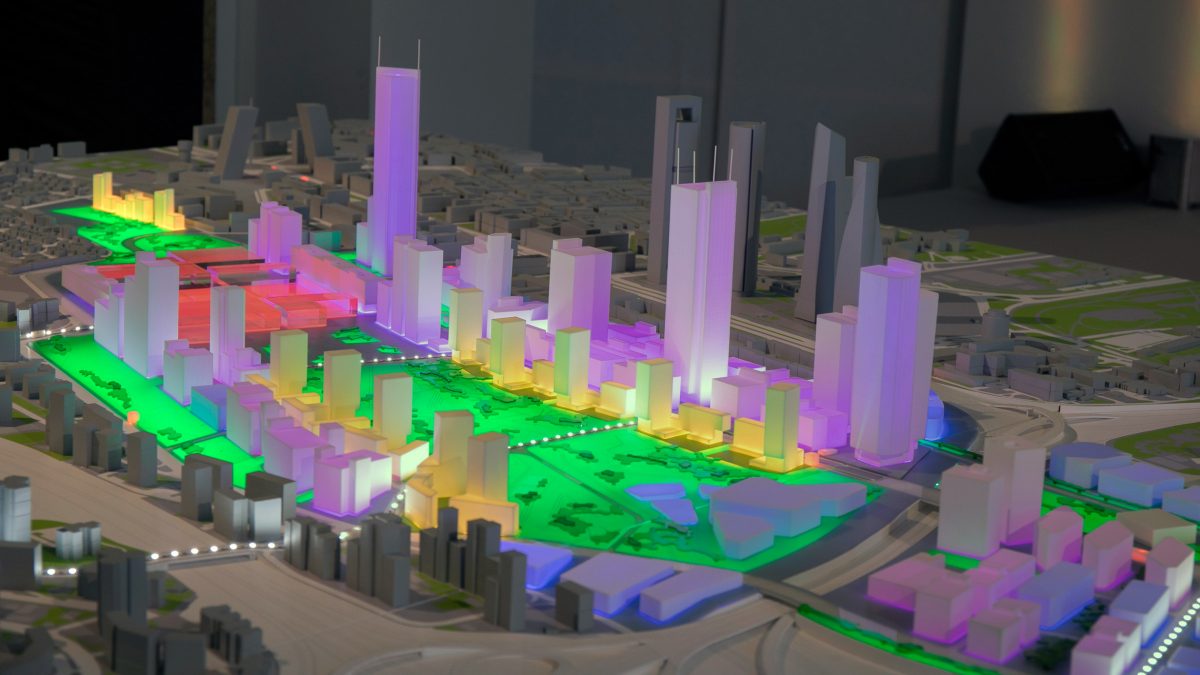 When the municipalist confluence Ahora Madrid won the municipal elections in 2015, they inherited a number of large and unfinished urban development projects, initiated by previous neoliberal-leaning city councils. The most important project was Operation Chamartín, which later became known as the Madrid Nuevo Norte project. Initially a small-scale project to renovate the railway station, it evolved into an ambitious effort to urbanize some of the last remaining undeveloped lands in the municipality. Indeed, it was considered by some as the largest urban intervention of its type in Europe. One of Ahora Madrid’s aims was to paralyse the approval process of this and similar urban developments in Madrid, and to reconsider them from a municipalist point of view.

Four years later, Ahora Madrid had split into two lists running for the municipal elections – Más Madrid (the list of the Mayor and her inner circle;  a group of previous members of Podemos who had left the party, and Equo) and Madrid en Pie Municipalista (which consisted of actors that had initiated Ganemos, like la Bancada and Izquierda Unida – now officially as a party – and Anticapitalistas, who became part of Ahora Madrid as a faction of Podemos). Although many other important tensions had already emerged within Ahora Madrid, the approval of the Madrid Nuevo Norte project played an important role in the break-up of the confluence.

Exploring how Ahora Madrid dealt with unfinished urban projects – like Operación Chamartín – inherited from the previous city councils of the Partido Popular reveals important challenges to the municipalist project. Overcoming these challenges is crucial if the municipalist method aims to provide stepping stones towards a post-capitalist order.

Chamartín station, the origin of the project 20 years ago (Photo: Clara Medina García)

Recent conversations with members of Ahora Madrid suggest that the confluence focused on  deploying ‘a strategy of opposition’ to the conservative policies that had been promoted over the previous 20 years. Based on a rejection of the previous political-economic urban model, this shared critique nonetheless proved to be a weak basis for organising things in a different way. Yet the absence of a shared blueprint for an alternative urban model, and a lack of agreed proposals, should not be considered an insurmountable obstacle.

The municipalist method entails a logic of “hacer” – meaning “to do” – which emphasises a prefigurative approach to addressing concrete problems. Part of its innovation and strength is found in the effort to transform existing institutions so as to make them function according to an idea of ‘radical democracy’, emphasising the collective knowledge of the people in the formation of an alternative political order. However, given the lack of consensus inside the confluence as to what form of radical democracy should be followed, and what it really means to transform these institutions, it is no surprise that conflicts arise the moment you try to implement these new practices.

In the case of Operation Chamartín, citizen tables (gathering citizens, grassroots movements, professionals,…) were organized to analyse and collectively evaluate the Chamartín proposal initiated under the previous city council. The input of these citizen tables led to the complete rejection of this proposal and the development of a new plan widely supported by Ahora Madrid and the different grassroots actors: Madrid Puerta Norte. Nevertheless, the inner circle of the mayor took this plan as the starting point, and began a long negotiation process with a private developer (DCN) and the national government, culminating in a new project: “Madrid Nuevo Norte”. Not only did grassroots actors reject the new project, but also the process that had been used to define it: they felt excluded from the process altogether.

This conflict was not a coincidence, but reflected (at least) two differing ideas of democracy present inside the municipal confluence: a variant based on the notions of horizontality, deliberation and cooperation (by the members of Ganemos) and a variant characterized by a vertical hierarchy and competition for a hegemonic position (by the members of Podemos). The latter variant was “applied” internally by the figure of the Mayor Manuela Carmena, who took power inside Ahora Madrid and deconstructed its internal organization. According to some who were involved in the confluence, from that moment on Ahora Madrid stopped functioning according to ‘municipalist’ principles.

Current state of the land to be developed within the Madrid Nuevo Norte Project (Photo: Clara Medina Garcia)

To understand the second challenge we need to take into account another important aspect of municipalism: proximity. The notion of proximity entails two elements: (1) Democracy loses its content and capacity if it does not give way to ‘areas of direct decision’ where people can exercise or enjoy some form of self-government. A necessary precondition is a manageable distance between political institutions and citizens. This notion of proximity can only be found in local space. (2) The local is the scale where problems – produced at whatever scale or place – are experienced and take their specific form. These elements turn the local into a space where significant change can be produced: by relying on regular people – not only on their experiences of real-life problems – but on their knowledge to tackle these.

According to Laura Roth (see Chapter II of Ciudades Democráticas), the idea of municipalism also entails that cities are those spaces where the complexity and diversity of society can be managed best. Municipalism seeks to build power in order to change reality throughout this complexity, by embracing it rather than trying to impose an inevitably simplistic order from outside. A municipalist project both exploits and relies on the direct and close interaction between the local institutions and the community (and as such relies on different forms of alliances, opinions and actors). Therefore, change will be produced bottom-up because it will be based on collective intelligence, rather than the narrow knowledge of a limited group of policy-makers and experts.

Nevertheless, the notions of complexity and knowledge were insufficiently problematized within Madrid’s municipalist project, and it is at this point where its weakness is found. The complexity of urban governance and planning was already a stumbling block for a lot of people participating in the redesign of squares (such as Plaza España). It is no surprise then that many citizens viewed Operation Nuevo Norte, which surpasses previous projects in its complexity, as a very abstract and challenging project to comprehend. Whilst it is true that relatively easy victories can be achieved at the local level, proving that change is possible, this does not (necessarily) apply to complex matters.

In the absence of an easy and quick victory, it becomes increasingly hard to mobilize people, and contestation of this complex urban operation remains very marginal. Rather than an example of popular engagement, the debate is almost entirely conducted by experts (urban experts, economists, mobility experts, critical thinkers, …). Another problem is that the majority of citizens in Madrid seem to support Operation Nuevo Norte, which could mean three things: (1) a majority of the people are not aware of the possible negative economic, social and ecological impact of this project (in terms of sustainability, mobility, gentrification, …); (2) or they don’t care; (3) or the critique of this project – both on the method and content – is overrated and wrong.

At this point we could ask a question: what knowledge matters and who has access to that knowledge? The claim that ‘the people will decide’ is based upon the assumption that the ‘appropriate’ knowledge resides with the people. But this dismisses any idea that knowledge (and more in particular truth) needs to be constructed. Truths are not discovered, but constructed. Therefore, we should not think in terms of a battle on behalf of the truth, but about the status of truth. The question about what knowledge matters is inherently related to the status of truth. Intellectuals (or experts) play an important role in the production of truth. Especially in complex matters like the Operation Madrid Nuevo Norte, we see that intellectuals and experts are involved in the debate, more than regular citizens.

Against this background it is interesting that Reyes and Russell suggest the possibility of combining “citizen wisdom with expert knowledge” to tackle problems people face in their daily lives. For real democracy to function, we need to go beyond the claim of ‘the people will decide’ and develop a more nuanced interaction between different kinds of actors with different kinds of knowledge. Concretely, we need to solve three problems: (1) in the current context of hybridization of roles, how do you define and differentiate citizens from experts and the knowledge they share or produce; (2) how do you combine these two different kinds of knowledges; (3) how do you make sure that this combined knowledge will gain sufficient authority to be able to stand against adversary powers?

Considering the case of Madrid Nuevo Norte from a municipalist perspective, the first dilemma triggered the development of competing participation processes from the Municipality and the private developer engaging different citizens and experts in a “quest” for legitimacy of their arguments. The second problem reflected the absence of wide involvement in those participatory processes and the lack of large-scale citizen contestation to the Operation Madrid Nuevo Norte. The third problem is reflected in the large support the project seems to enjoy (by both citizens and mainstream experts).

Despite these two challenges or problems, we are not arguing that municipalist approaches are incapable of addressing or providing alternatives to such complex urban projects. Challenges can be overcome; problems can be solved. A main task for municipalist organisers is to clarify two things: (1) a consensus about what radical democracy looks like in their locality; (2) a strategy for combining different kinds of knowledge so that the outcomes of these processes have sufficient legitimacy and capacity to create another city/world.

Translated into Spanish by Federico Gatti.

Pieter Rondelez is a PhD researcher at Ghent University, Faculty of Political and Social Sciences.

The author acknowledges funding support for the research leading to this publication from the Research Foundation Flanders (FWO) under the SB PhD fellow project number 1S46920N.