Home » Magazine » How gentrification works in Istanbul, Turkey, ways to resist it and where we are falling short
Magazine

Istanbul is the largest city (around 16,000,000 people) in Turkey and it is the economic and cultural centre of the country. Gentrification in Istanbul started as a classical gentrification process (that is, through the private housing market or market-led). After the 1950s, the population in Istanbul increased dramatically, and lifestyles started to change. The transformation of the central business district (CBD) reflected the economic transformation that the city was experiencing. Growth in the finance and insurance sectors expanded the CBD, and with the construction of the first bridge on the Bosphorous in the 1970s, the CBD expanded to the north of the city. During this expansion, the importance that had been given to transportation was essential. When the distance between home and work places became easily travelled, the settlement in the city spread to the peripheries. Like other Southern cities, the middle class moved out of the historic city centre, and the centre began to decline and become ‘undesirable’. At the end of the 1970s, the historic city centre lost its prestige and became a place for the poor. But, as stated by Oncu (1997) in the 1980s, the middle class started to move back to the city centre and inner city. The attraction for gentrifiers in such neighbourhoods was not entirely locational. The motivation was also about what the place meant: memories that belonged to these particular places were and are an important element of gentrification. The appropriate word to describe this aspect of the process is ‘nostalgia’. The neighbourhoods that are gentrified or being gentrified were multicultural places where the upper middle class Armenian, Greek and Jewish citizens used to live. As happened in other gentrifying neighbourhoods after the 1980s, this character of the neighbourhoods fulfilled the professional class desire to create a new cultural identity with their imaginaries of these places. Professionals wanted to define themselves as the people who cherish and realize the multicultural past of Istanbul and was an element of its nationalized market economies. As the process of gentrification unrolls, the neighbourhood develops a distinctive cultural atmosphere, not merely middle class but ‘creative’, ‘bohemian’ and ‘vibrant’; and these areas are assumed to be more socially tolerant of ethnic, gender, and sexual differences.

However, in the last 20 years or so the neoliberal urban policies implemented in Istanbul have started to not only increase land grabs and speculation, but also dispossession, which has further supported the accumulation of capital, as set out by David Harvey. This situation has led to many massive urban regeneration/redevelopment projects and brutal processes of eviction (a.k.a state-led gentrification). Some examples of neighbourhoods that suffered this fate are: Tarlabasi, Sulukule, Ayazma, Ayvansaray and many more. As part of my doctoral studies, I had the opportunity to observe the deleterious effects Tarlabasi Renewal Project has had on the vulnerable urban population.

The procedure in ‘regeneration/renewal/redevelopment’ projects is almost the same all over Turkey. First, the local or national state calculates the value of both of the dilapidated flats and the new ones in the project area. Next, the owner has to decide whether to sell the flat at the estimated price to the construction company or to the municipality and accept paying the gap between the price of the old and the new property by using bank loans. Then, if they cannot afford the bank loans for the renewed project area, flat owners are offered a social housing flat that are usually located at the periphery of Istanbul. This offer usually does not extend to tenants, and social housing in Turkey can only be bought through cheap state-facilitated mortgage loans. This system is especially problematic when the decisions about regeneration are given in a top-down manner and decided by the central and local authorities, without the consent of the inhabitants. In many cases, this means increases in rents and housing prices in the project and surrounding areas, which the current inhabitants are often unable to afford should they choose to stay in or around project areas. Therefore, most often, they do not have any alternative than relocating to the peripheral social housing flats, for which they are obliged to repay long-term loans to the banks. The result is usually loss of jobs, their supporting social network, and naturally, their flats, if they are not able to pay the loans to the banks, especially in high unemployment periods. In other words, if they become unemployed and cannot pay the mortgage, they are at risk of losing their new flats as well.

Resistance against gentrification-led displacement in Istanbul

Having said that, forms of resistance against gentrification in a neighbourhood are usually affected by a (re)creation of place and current inhabitants’ loss of power. In many case studies set out by scholars such as Davidson and Lees, the arrival of gentrifiers has been shown not only to change the physical appearance of the neighbourhood, but also to change the social balance, leading to a transformation of community. Claiming rights to stay and creation of place are key features to a resistance against gentrification. This resistance commonly comes in the form of a non-governmental organization (NGO) form (i.e. Tarlabasi Association, Istanbul Urban Defense, Febayder, Sulukule Platform). It is possible for working class inhabitants to become organized and claim their right to stay and create a network with other urban justice organizations, professional chambers, and media. Even though resistance is a long process that does not always reverse the displacement process, it creates public awareness, creates an example for neighbourhoods in the early stages of gentrification and strengthens the neighbourhood relationship in the area. In Istanbul, resistance against processes of gentrification follows a similar pattern.

In addition to protests and organizing through NGOs, urban grassroots, housing justice organizations and professional chambers (i.e. Chamber of Architects of Istanbul and Chamber of Urban Planners in Istanbul), there is also an important legal battle going on against not only massive urban regeneration/renewal projects that are usually followed by state-led gentrification, but also other forms of urban megaprojects that could have irretrievable environmental and societal consequences. In regard to the legal battles and challenges, there have been many individual and joint lawsuits happening and happened over the course of many urban renewal/redevelopment projects that were sometimes led and won by ordinary people. Even when most of the lawsuits concluded in favour of the construction companies or local and national state, it certainly helped in terms of slowing down the processes of gentrification (see Tarlabasi urban renewal project example). I think laws and regulations have not received the attention they deserve in gentrification studies especially in terms of resisting gentrification. 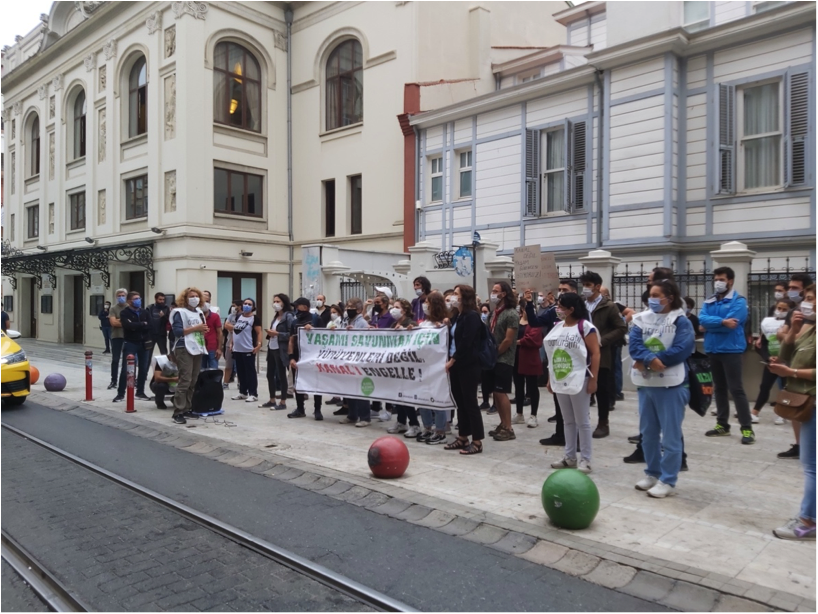 A protest against an urban megaproject in Istanbul.

Following from that, one important shortcoming of the urban grassroots and justice organizations in Turkey and in Istanbul is the fact that there is not much going on in terms of fighting the increasing rent prices and decreasing housing affordability in the rental housing market (in addition to decrease in housing affordability as a whole). This was also apparent in terms of resistance against gentrification and displacement that followed. Associations that were established solely to resist processes of gentrification and state-led urban regeneration/renewal projects usually consisted of owner-occupiers rather than tenants. One example for this is the Tarlabasi Association that only included tenants, after some criticism and they realized that they needed tenants’ support as well. It was only after they included tenants the organization against the state-led project and gentrification process took a much more influential turn and solidarity among the neighbourhood increased. Unfortunately, this solidarity was not enough to reverse the gentrification process or give tenants more of a safety net. This is because the lack of enough affordable units in the housing market and tenant protection by regulations are pressing issues not only in the context of gentrification, but all housing related issues and resistance in Istanbul and in Turkey.

Image by Aysegul Can

Rethinking land and relation in Berlin's struggle for housing justice