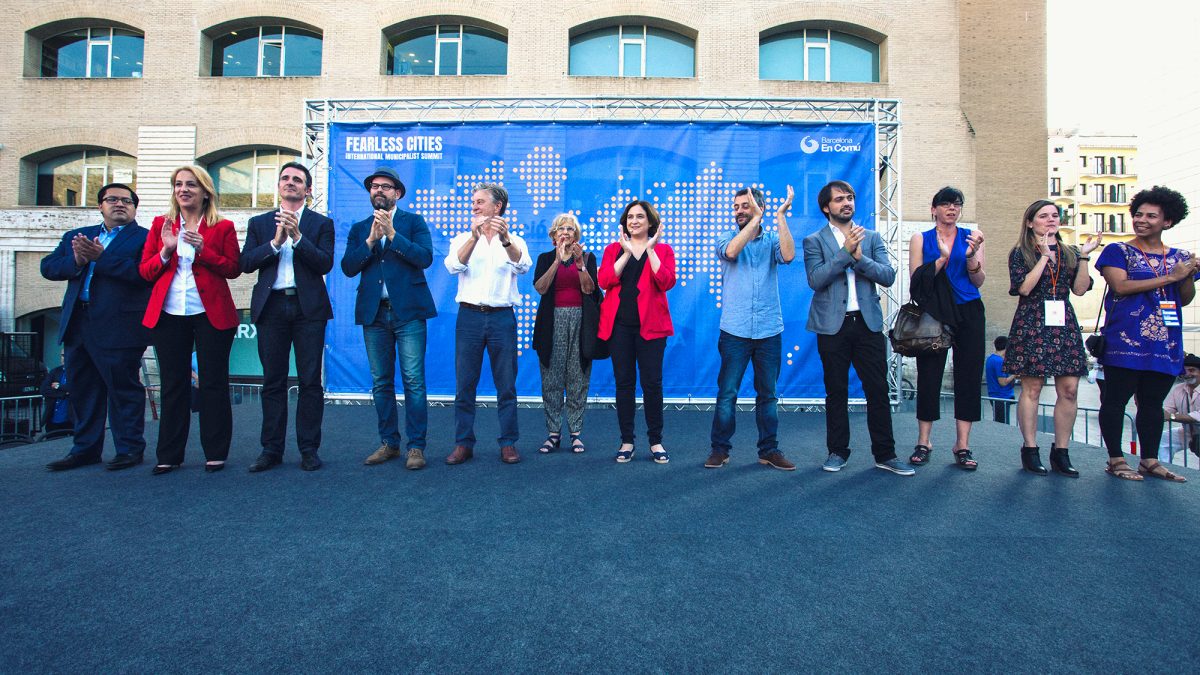 2019 was Spanish municipalism’s annus horribilis. A number of local candidatures were riven by internal divisions and, in the May elections, governments fell in important cities like Madrid, A Coruña and Zaragoza, among others. Nevertheless, it’s not all bad news for those who defend municipalism as a tool of social and political transformation. The appearance of these so-called ‘Cities of Change’ in 2015 represented a jump from the streets to the institutions with few precedents in our times and, as such, has left a mark at international level. Over the past few years, allied candidatures have won elections in Jackson (Mississippi, USA), Valparaíso (Chile) and Amsterdam (Netherlands), and 2020 promises to bring further expansion of this incipient global political movement.

The local elections in France in March are the first important date in the calendar. People have been working on municipalism in the country since the spring of 2016, when France’s ‘occupy’ movement, Nuit Debout, took place. This movement, which was supported online and in person by Spanish indignados activists, identified municipalism as a possible horizon from the beginning. This is unsurprising, given that France has a significant municipalist tradition, both in the capital (the Paris Commune is a key ingredient of the contemporary municipalist imaginary) and in smaller towns (like Saillans, which is an example of practices of participatory democracy).

The 2017 presidential elections only served to strengthen the municipalist hypothesis. First, because they demonstrated the difficulties of taking state power from the left with a national  candidature that lacks a strong grassroots base like France Insoumise. Second, the fact that Marie Le Pen reached the second round and Macron won by being the ‘least worst’ option, made the necessity of building an alternative to both the far right and neoliberalism even more obvious.

It’s in this context that, in the run-up to the municipal elections, around 150 ‘participatory lists’ are being put together. In Marseille, where the current mayor, Jean-Claude Gaudin, won’t be standing for the first time since 1995, 10 political and civic organizations have come together to create the candidature “Le Printemps marseillais”. In Toulouse, the candidature “L’archipel citoyen” was founded in the summer of 2017 and has a strong citizen and participatory character. In smaller towns like Commercy and Quimper, Yellow-Vest activists are participating in municipalist candidatures that combine ecological proposals and social demands. Finally, the case of Grenoble is worth highlighting; there, mayor Eric Piolle is seeking to bring in all left parties and broaden the candidature that took him to victory in 2014. This time round, Piolle is favourite in the polls and will stand under the name “Grenoble en Commun”, emphasizing to his links to Catalan municipalism.

If these lists achieve institutional representation in dozens of municipalities and won two or three mayoralties, it will open a window of opportunity and hope in French and European politics.

The United Kingdom may be on the verge of starting the process of building a municipalist movement like the one in France. Labour’s electoral defeat in December and Corbyn’s resignation are provoking a period of deep strategic reflection among Labour members and activists on the British left. Though much of this debate is focused on who should replace Corbyn as Labour leader, and with which policies, there’s also discussion about the radical potential of ‘municipal socialism’.

This is happening for a number of reasons. First, the context of national polarization has generated renewed interest in the local level as a place to bring together people who have different opinions about Brexit. Furthermore, municipalism allows the creation of different political projects and candidatures for diverse local contexts, another important advantage in a country that suffers deep regional inequalities and where the particular demands of its four nations are gaining ground in the political agenda.

Though it’s true that local governments’ lack of power and the budget cuts that they’ve suffered during the economic crisis continue to provoke criticism of municipalism in the UK, the achievements of the Labour government in Preston, a post-industrial city in the North of England, have helped to assuage some of these fears. The ‘Preston Model’ of public procurement has become an example of how to harness the budgets of local institutions to democratize the economy and improve wellbeing, and is increasingly seen as an example to follow.

Given that the municipalist debate is in an early stage, it’s unlikely that we’ll see municipalist candidatures at the local elections on the 7th of May. But it is possible that 2020 becomes the year that Corbynism decides to channel its energy and experience to the local level.

Municipalism is already acting as a force of opposition to the speculative, violent and ecocidal policies of Bolsonaro in Brazil. In the 2016 municipal elections, a number of candidates were elected that had roots in neighbourhood, feminist, indigenous and anti-racist struggles, including Áurea Carolina in Belo Horizonte, Marielle Franco and Talíria Petrone in Río de Janeiro and Marquito in Florianópolis. The political assassination of Marielle Franco in March of 2018 proved the level of risk undertaken by those who dare to defend human rights and stand up to the abuse of state power in Brazil. It was also a sign that the presence of marginalized communities in elected institutions is seen as a real threat by the powers that be.

The communities that have been most affected by the Brazilian government are urgently organizing for the municipal elections in October. Their goal is to ‘hack the system’, not just by increasing the number of women and black, LGBTI and indigenous people in elected politics, but also by transforming institutional politics by introducing mechanisms of participatory and direct democracy.

The Ocupa Política network is playing an important role in this process. Founded in 2017, it works to promote the ‘occupation’ of institutional politics by activists and movements and, in this way, transform the political system itself. It has helped 16 candidates to win seats so far, and it is increasingly connected to similar movements in the rest of Latin America, Europe and the USA. There is a deep awareness in the country of the interdependence of municipal processes in Brazil and the global political context.

From those seeds, these shoots

As it would be expected, municipalism isn’t being adopted automatically nor uncritically around the world. It’s received with greater enthusiasm in those countries that have some historical tradition of radical municipalism and, either way, it is assessed in relation to the other strategies on offer, which tend to be either attempting to take state power or rejecting electoral politics altogether. And municipalism is an idea that stokes passionate debates: about whether it’s a real tool for transformation or rather a ‘defensive’ strategy in the face of right-wing national governments; about the lack of powers and resources of local institutions in many countries; about the risk of leaving smaller cities or rural areas behind with an exclusively urban municipalist project.

What is certain is that the municipalist hypothesis gained increasing traction in left movements and parties over the past five years, and it seems that it’s here to stay. The seeds that were sown in hundreds of towns and cities in Spain in the spring of 2015 have taken root and, in 2020, we’ll see fresh shoots of neighbourhood organizing, direct democracy and transformation through the politics of daily life beyond the Iberian peninsula.

This piece is also available in Spanish in Eldiario.es

Featured image: Some municipalist mayors during the Fearless Cities summit in 2017