Home » Magazine » An ambitious, radical Green-Left Coalition has won Zagreb’s elections. Here’s how they did it.
Magazine 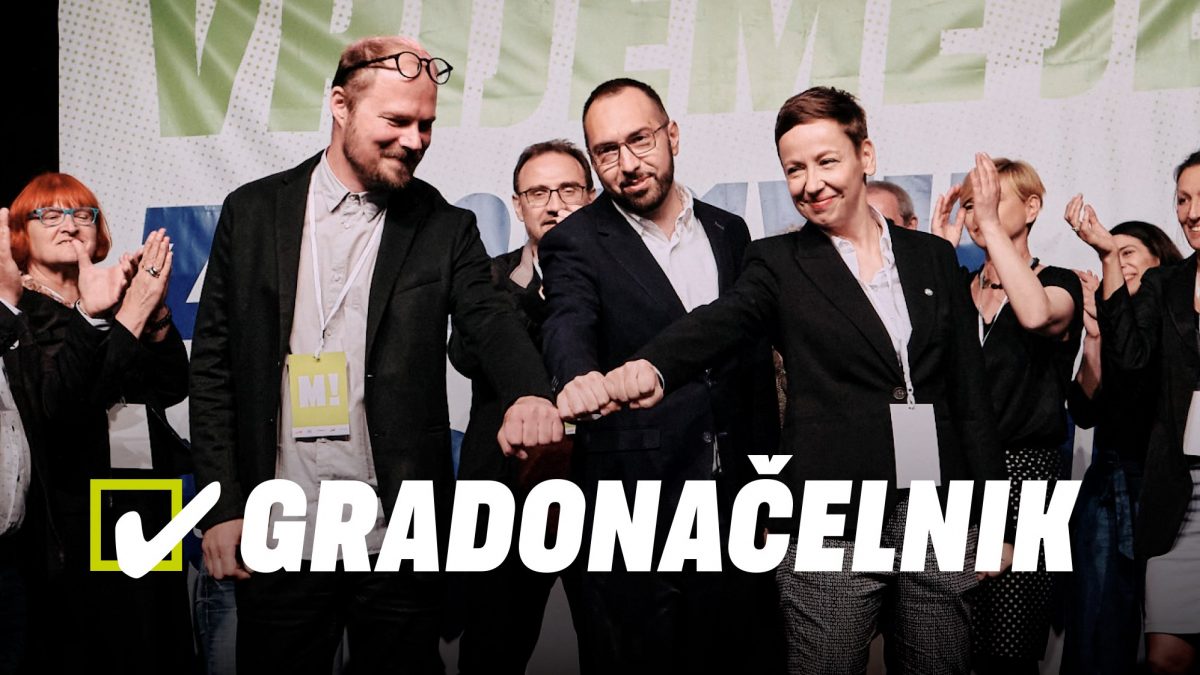 This year’s local elections in Croatia, and in particular elections in the country’s capital of Zagreb, have been marked by the overwhelming success of the Green-Left Coalition headed by Možemo (We Can) and Zagreb je naš (Zagreb is Ours). The Coalition’s programme, based on consultations with more than 10,000 citizens of Zagreb, pursues many ambitious plans aiming to put an end to neoliberal trends in city development: investment in extensive public housing programmes, equal access to healthcare and education across the city, support for workers’ rights, a green renewal plan, and more.

In the Zagreb City Assembly elections, held on 16 May, the Coalition won 40.83% of the popular vote, gaining 23 out of 47 seats. The Coalition also won the first round of the mayoral contest, with its candidate Tomislav Tomašević taking 45.15% of the vote. The victory was confirmed in this Sunday’s runoff election against the far-right candidate Miroslav Škoro. In spite of the opponent’s rancorous attempts at labelling the Green-Left Coalition as the project of foreign-funded agents and extremist left NGOs, the public has supported Tomašević with convincing majority of 63.9% of the vote. Within the assembly, parties of the Green-Left Coalition — which also includes the parties New Left (Nova ljevica), For the City (Za grad) and Sustainable Development of Croatia (Održivi razvoj Hrvatske – ORaH) — will probably construct the majority with the centre-left Social Democratic Party, which won five seats in the City Assembly.

The popularity of the Green-Left Coalition has also been confirmed in the elections for sub-local levels of government in Zagreb, organised in 17 city districts and 218 local committees. The Coalition got the best result in whopping 16 out of 17 city district councils and 101 local committee councils, giving it a governing position in most parts of the city. Beyond Zagreb, the Coalition ran in eight other cities across the country (Split, Rijeka, Osijek, Pula, Karlovac, Dubrovnik, Korčula, and Pazin), and it managed to gain representation in city councils in all eight of those, while in Pazin it also won the mayoral contest.

The success of the Coalition is even more astounding when compared to its initial electoral run in the 2017 local elections, when it won 7.6% of the vote and four seats in the Zagreb City Assembly. Despite its relatively marginal position, through constant confrontation with the corrupt government of the city mayor Milan Bandić, the Coalition managed to symbolically become the leading opposition actor. Building on this experience, in 2019, a contingent of the activists of Zagreb is Ours formed the party We Can and ran in the 2019 European Parliament elections. The project further developed in the 2020 parliamentary elections, when the Green-Left Coalition achieved 6.99% of the vote and entered the Croatian parliament with 7 seats out of 151.

How they got there

There are many interrelated factors that can be ascribed to the Coalition’s historical success in Zagreb. First, after a devastating earthquake that shook the city in March 2020, combined with a flood that hit a few months later, and the effects of the COVID crisis, the problem of the city’s decaying public infrastructure and the corruption-ridden local government became evident more than ever before. Second, the main centre-left party (Social Democratic Party) has been losing its credibility among the traditionally left-leaning Zagreb electorate. Ridden with in-fighting and general lack of ideological coherence, the Social Democratic Party further boosted the position of the Green-Left Coalition as challenger. Third, the Coalition’s success in the July 2020 parliamentary election gave the Green-Left Coalition greater public visibility in the national media and set up the stage for further growth of the Coalition’s popularity in the local election.

Although these broader contextual factors cannot be overstated, it is also important to note that the strength of the Green-Left Coalition stems from the practice of political organising at the level of city districts and communities. While the Coalition’s potential in central city districts in Zagreb, such as Donji Grad or Trešnjevka, was already clear in the 2017 election, a lot of energy and groundwork had to be invested in organising the platform in more peripheral quarters.

But, what did this groundwork entail and what were the challenges in spreading the platform’s visibility across the city? In answering this question it is useful to focus on two peripheral quarters where four years ago the Green-Left Coalition won the least results: Peščenica-Žitnjak and Stenjevec.

Peščenica-Žitnjak is one of the larger city districts with a very heterogeneous urban environment. It covers planned residential areas of high-rises from the socialist period, enormous and largely defunct industrial zones, as well as spontaneously developed areas of individual housing that have been sprawling for decades without adequate communal infrastructure and public services.

Reflecting on her work in the past year, Antonija Komazlić, one of the local organisers at Peščenica, says: “I took over the task of organising with one of my colleagues without being fully aware of the extent of work that organising across such a large district entails.” They found the way forward by engagement with municipal problems on the ground. For example, after flooding in July 2020 caused water pollution, a household situated in the district started to struggle with access to potable water. The fact that, out of all political parties present in the district, only the Green-Left Coalition showed some interest and problematised such issues in the District Council, extended their membership. Further interest was attracted through online surveys inquiring about local problems and priorities for each local committee.

Going from there, the actual on-the-ground organising was very intensive, as explained by Antonija: “As we moved further away from the city centre, we had to struggle for each individual. We had to contact each person, meet with them on various occasions, inform them about news, send our organisational documents, and involve them in our activities. Each local committee group created its own program, which turned out to be particularly useful as a tool of empowerment.” The Coalition also managed to contact and cooperate with some of the already existing neighbourhood-level initiatives, offering them support and platform for electoral engagement.

Another case is Stenjevec, a much smaller district but which nevertheless has a diverse urban environment and many different problems. Over the past decade, Stenjevec has seen the development of overcrowded neighbourhoods of free-standing houses as well as newly built apartment buildings. Due to poor planning, public services and necessary infrastructure have not been following along with the district’s development.

Marin Živković, an organiser from Stenjevec, told us about the beginning of the local group there: “When we started organising the group, at the end of last summer, most of our members at the very beginning were motivated by the parliamentary election results, showing interest in national-level political issues.” As in Peščenica, the online survey in Stenjevec served as a way of attracting people with more interest in municipal issues in their immediate environment.

According to Marin, the central organising philosophy that made them different from other political parties was putting an emphasis on collective rather than individual effort: “In the group, we always tried to emphasise that this is a common endeavour, and that we’re all in it together. Nobody was proclaimed a leader. The basic idea is that a group of people continues to function as a group even after elections. This is, I think, also the reason why most people were willing to put their names on the ballot.”

All in all, the recipe for increasing citizens’ interest in politics is then rather straightforward: demonstrating that a group of people organised in a political party can say something meaningful about substantial problems in their immediate environment. In this way, political participation becomes an instrument of resolving concrete problems: dysfunctional waterworks and sewage systems, unreliable traffic infrastructure, or unbearable housing inequality. At all levels of local government, and especially at the level of districts, resolving these issues has previously been rarely associated with participation in politics, let alone party politics.

Even with astounding electoral support, entering the local government for the Green-Left Coalition will be a demanding task. On the one hand, the Coalition will have to take power over a large-scale apparatus that has for many years been functioning not according to meritocratic and professional criteria, but was rather used for an elaborate system of spoils by the former mayor and his coalition partners. On the other hand, the new city government will have to confront the vested interests of several private corporations that have been profiting from the clientelism of the government for two decades.

Finally, entering the government also means that the organisational structure of the Green-Left Coalition will have to be adapted to its new position. Fortunately, after a campaign that has been effectively going on since before the 2020 parliamentary elections, no new elections are currently in sight until 2024, which creates a unique opportunity for reflection and further development of the organisation.

The analysis of the Green-Left Coalition’s development and electoral results will probably remain a topic of journalistic and academic interest in the coming months and years, especially since the success of the Coalition may signal the potential for similar future development in other countries of Eastern Europe. Combining green and left politics through a municipalist organising model may indeed prove to be the way forward in the region marked by an increasing influence of the far-right and a still by and large marginal role of radical left electoral actors.

Report #5: Fragile alliances: Municpalism and the commons in Amsterdam