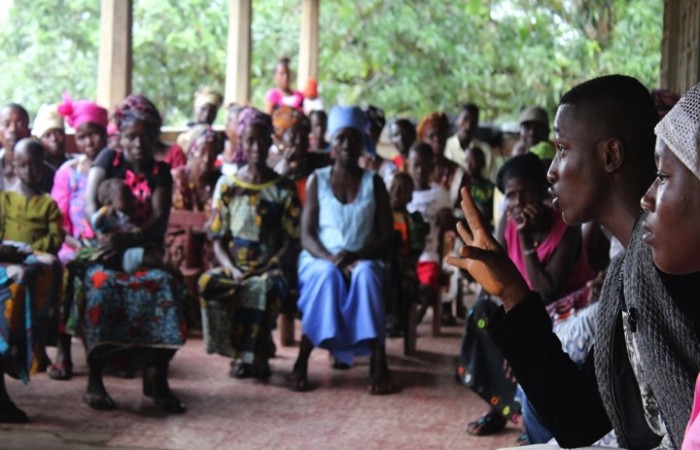 “I am not afraid of the Ebola. I stand by my work to save people,” community health nurse Isata Kabia, who worked at Panlap Community Care Centre (CCC) in Sierra Leone, explained to UNICEF about risking her life to confront the Ebola epidemic in 2015. The Guardian published UNICEF’s interviews with nurses, health assistants and other Panlap CCC workers.

John Bangura worked as security, screening patients and taking their temperatures as they arrived daily. “The patients, they are familiar faces, so they don’t disturb us, they take the treatment. We live around the community; we don’t have any fear, so they come.”

These healthcare workers risked their lives against Ebola, as do all essential workers globally facing today’s Covid-19 pandemic. The Panlap worker’s wisdom is echoed in subsequent papers from World Health Organisation, peer-reviewed academic papers and medical journals: local community-based responses were essential in eradicating Ebola from West Africa in 2016.

Although Ebola and Covid-19 are distinctive – the former more deadly, the latter more contagious – the decentralised responses to Ebola is extremely relevant today. None of the communities responding to Ebola defined themselves as municipalist, but community engagement and social mobilisation were essential. These are also central threads in the municipalist movement around the world.

The first cases of the West Africa Ebola outbreak were observed in eastern Sierra Leone May 2014. The first healthcare response was to re-designate four large hospitals by October 2014. People feared and avoided sending loved ones there, as these were associated with death, not least after a large outbreak at Kenema Hospital, eastern Sierra Leone.

The virus centred at major hospitals, killing many patients and healthcare staff. These places were distant from patients, or lacked beds when patients finally arrived. Another issue was that populations distrusted national authorities or foreign interference, after the establishments’ roles in colonialism, conflict and globalised capitalism that did not benefit the countries.

From November 2014, municipalities began taking patient care into their own hands. Community Care Centres (CCCs) were set up in Sierra Leone, Guinea and Liberia. Local chiefs allocated local land, where locals erected tents or huts, or repurposed schools closed due to anti-Ebola measures. Local nurses, cooks, cleaners and other staff were employed by the national government, international agencies and charities. Staff were trained in prevention measures and Ebola care, others worked in community liaison – building knowledge and resilience. Places with CCCs were found three times more likely to detect Ebola early – allowing quarantine and treatment.

CCCs meant the Ebola patients could be cared for and quarantined. Families could be near their loved ones, for instance providing food from a safe distance through a safe pick-up zone. The virus stopped spreading.

Supporting community-led responses, the international community finally sent assistance. Testing procedures sped up and other measures were introduced, such as a vaccine was licenced. Also there were advances in patient care.

The 2014 Ebola outbreak spread particularly in the border regions of Guinea, Liberia and Sierra Leone, and each country was particularly vulnerable. All had suffered devastation from recent civil wars, in Sierra Leone and Liberia caused by ethnic hostilities driven by imperialism since slavery. Sierra Leone had been colonised by Britain and Guinea by France, with the US effectively colonising Liberia. Corporate extractivism continues today including for rubber, gold, diamond and iron ore.

Musicians and activists united in cross-border collaboration against Ebola including the song: Africa Stop Ebola. This featured artists including Senegalese hip hop’s Didier Awadi who was involved in the pro-democracy decentralised Y’en A Marre movement. With Covid-19, recently Y’en A Marre used their platform to pressure the government to arrange physical distancing measures, and again they pushed public safety messages.

Today’s Covid-19 pandemic spread from Wuhan, China, down globalisation’s superhighways, such as cruise ships and trade links to east Asia, Iran, Europe and the US especially. Now it is reaching the global South, and there are strong concerns on its impact on countries that are short of healthcare resources and infrastructure due to centuries of impoverishment through capitalist imperialism. For instance, Mali has 56 ventilators and a 19 million population.

The pandemic needs a strong global social justice response and system change. But it also offers us a chance to look at lessons African countries can teach us from local level solutions – breaking the racist and patriarchal misconception that answers originate from rich white men.

Esther Mokuwa et al. writing in African Arguments, April 2020, point out how Community Care Centres and local care could be central to fighting Covid-19. They stress how despite the lack of healthcare infrastructure, pandemics need ‘old-fashioned public health measures’. They point out that already Sierra Leone offers immediate lessons to places such as the UK about effective contract tracing. Dealing with Covid-19 will also be about mitigating other health crises and finding a balance when it comes to socio-economic impacts of the measures.

Anthropologist Paul Richards – author of Ebola: How a People’s Science Helped End an Epidemic – explained on LSE’s blog how chiefs’ role in tackling Ebola is often overlooked. Local leaders were able to galvanise local communities to take measures where national politicians and international agencies could not. Chiefs played an important role advocating for safe respectful burials: Ebola leaves the dead highly contagious, whilst many funeral rituals include washing the bodies. This meant a compromise was needed to make burials safe, but still be respectful enough that families did not continue traditional practices in secret. People also had to be persuaded to end traditions, such as eating bushmeat, another high Ebola risk. Researchers have noted the communities that most trusted their leaders were most responsive, leaders disconnected from their communities were ignored.

Local communities also designed their own lock-downs. Paul Richards explains how within  community-led lock-downs against Ebola, people recognised how a pandemic needs a differentiation between quarantining ill people (in CCCs) and isolating and protecting vulnerable people elsewhere.

Volunteers also formed a key pillar of the community response. These took on activities such as self-organised tracing activities, also acting as first responders filling the gap left by under-resourced healthcare overwhelmed by the new Ebola outbreak. A Social Mobilisation Action Consortium programme in Sierra Leone, trained and supported around 2,500 community mobilisers. Their role helped communities coordinate local specific plans not only to stop Ebola transmission, but also other important problems, from hunger to the rise in teenage pregnancies.

Isata Kabia, Sierra Leone’s first female MP of the PortLoko district (Northern Province), and later a government minister, also rallied a critical bottom-up response. In 2012, as an MP she had been involved in creating a citizens’ parliament to hear people nationwide. With donations and her own money, she brought mobile phones to connect people involved in the citizen parliament to share information about Ebola from remote areas, critically right at the start of the outbreak. The language in which Ebola was discussed also enabled passing on knowledge, for instance Ebola in Mende – a language of Sierra Leone – translates as bondawote meaning ‘family turn around’.

The crucial role communities played in Ebola shows how municipalism should be a strong part of the response to the Covid-19 pandemic. Far less is known about this coronavirus than Ebola as it spreads across the world. But there is a strong weight of scientific understanding that suggests we will have to deal with this pandemic for months, even years. This means the response must be co-created by the people, as when political elites ignore communities’ needs, communities will ignore the politicians’ advice. There also needs to be flexibility to rethink the policies when they are not working and when we learn more about the virus and its impacts. There is no one-size-fits-all solution to Covid-19.

Different places are suffering a world of difference due to national policies. From Namibia to New Zealand, early interventions are working and a world away from the policies of countries such as the US and Brazil, where populists are causing exponential deaths. But worldwide, we need to realise the virus spreads in communities, so communities should be at the fore of eradicating this virus.

Reports about municipalism in the Global South