Home » Magazine » For Amsterdam's experiment in new municipalism to succeed, it must put vague terms into practice
Magazine 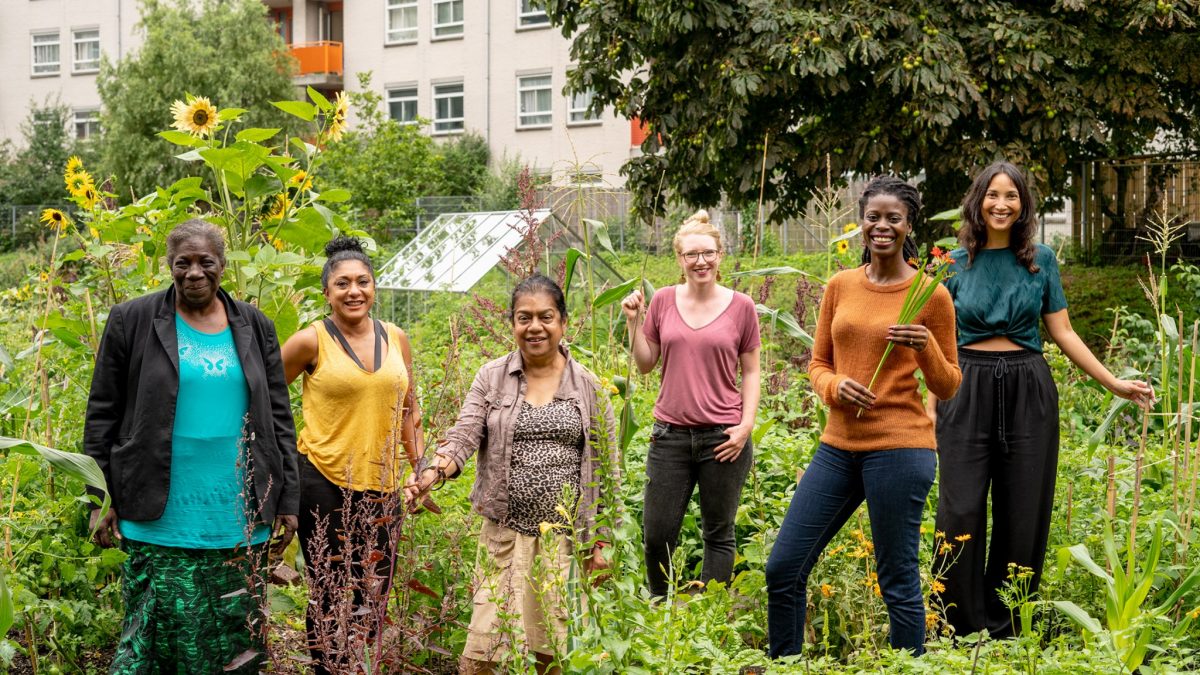 “There has been something strange [going on] for the last forty years in Amsterdam”, Joost, a community organizer in the west of the city, reflects. He frowns remembering his experiences as part of the squatting movement in the 1980s, when Amsterdam’s streets and neighbourhoods were politicised by mass movements claiming their rights to the city.

Today, these same streets are dominated by booming real estate and tourism. The collective voices of citizens, according to Joost and many other activists and academics I’ve met in Amsterdam, have fallen quiet. Joost blames creeping political disengagement in Amsterdam on “neoliberalism […] everything now is run like a business, […] citizens are turned into customers” who complain about services from the local government, rather than mobilising collectively for change.

Joost’s critique has long resonated in Amsterdam’s activist spaces and universities. Recently, however, it has also gained traction within the municipality. In 2019, following the election of a left-leaning coalition to the municipality, a team was set up to deliver the Amsterdam Fearless City Programme, tasked with bringing the emergent international movement of new municipalism to Amsterdam. The Fearless City Programme, delivered partly by activists who have entered institutional politics for the first time, aims to empower citizens and urban social movements to drive change across scales. As Rutger Groot Wassink, deputy mayor, and Femke Roosma, the political leader of the Green Party in Amsterdam, put it,

In short, politics can be reinvented in cities. Never mind the institutions, back to the neighbourhoods, the squares, the agora. Only then can new urban movements become catalysts for political change, which eventually will spread to national and European levels.

Amsterdam policymakers frame their ambitions to re-politicise the city in relation to the international Fearless Cities network, especially cities like Barcelona and Naples, where social change is being pursued, inspired by Podemos, with “one foot in the institutions and a thousand feet in the streets.”

However, in comparison with these oft-cited exemplary cases of new municipalism, the political life of Amsterdam’s streets and neighbourhoods is muted. In the contemporary context of Amsterdam’s depoliticised civil society, the task of building alliances with “a thousand feet in the street” is daunting. Although generations of activists and neighbourhood organisers, like Joost, have continued to work to reclaim the city in the hostile landscape of neoliberal Amsterdam, terms like “municipalism” are seldom recognised. So how can the emergent municipalist emphasis in institutional politics empower existing and new grassroots initiatives working to re-politicise Amsterdam?

To begin to answer this question, we brought together the voices of activists and policymakers from across the city in a report exploring the unfolding relationship between municipalism and the commons in Amsterdam. This article summarises the report’s findings, arguing that, whilst new municipalist terms can help to initiate alliance-building, municipalist alliances must be built on more than vague shared vocabularies. For Amsterdam’s municipalism to strengthen and endure, it must be rooted in collective political knowledges and practices in neighborhoods.

A host of new municipalist political concepts have recently appeared in urban policy documents in Amsterdam – from “the commons” to “community wealth building” and “the doughnut economy” – but policymakers and activists are in the early stages of translating this vocabulary into the context of Amsterdam. As they begin to negotiate the awkward spaces between clashing political agendas of citizens, social movements and institutional politics, this process of translation is proving to be both a challenge and a productive tool of alliance building.

Marly, an activist and policymaker working on the Fearless City Programme, recognises the challenges. She feels her team have been given “a vague assignment […] because there’s a vision behind it which is implicit”: there are few concrete definitions of what terms like “municipalism” mean in Amsterdam, beyond the general principals of democratising politics and economics in the city. Marly notes that radical anti-capitalist visions of municipalism used by “international activists, especially from Spain” translate uneasily to Amsterdam, where the municipality “has a different narrative that’s more bureaucratic, less politicised, and so translating [municipalism] without changing the meaning too much is really a burden.”

This process of translation is certainly difficult, but it also reveals political potential. “Municipalism” is a term that appeals at once to social movements and to institutional politics; it contains the radical agendas of international practice and theory alongside less overtly politicised principles of democratisation and local empowerment which can appeal even to the more conservative municipality. This range of meanings exists within much new municipalist vocabulary – “commons”, for example, a term with notoriously slippery theoretical definitions, is being embraced by Amsterdam’s municipality as a foundation of municipalism. The municipality defines commons loosely as “democratic organisations in which the participants together take care of a collective good”. Such an open definition neither affirms nor denies the more radical post-capitalist meanings carried by the concept of the commons in the eyes of many activists and theorists, from Massimo De Angelis to Paul Chatterton. Instead, it allows space for definitions with differing levels of politicisation to coexist alongside one another. “Commons” in this process, functions almost as an “empty signifier”, an indeterminate term, in Ernesto Laclau’s definition, like “change” or “democracy”, which is understood in so many ways that it is able to bring together diverse political actors and perspectives around a shared agenda.

In Amsterdam, this has allowed the term “commons” to facilitate alliances between political actors with diverse ambitions. Safet is part of an activist group designing a housing cooperative in east Amsterdam “fully organised around the principals of commoning”. Safet told us that the project was initiated by applying to a competitive call for projects “and closely collaborating with the municipality” in response to the municipality’s desire to experiment with cooperative housing projects. For Safet, the project aspires to be a “post-capitalist commune”, but in their application to the municipality his team used the term “commons” to appeal to both sides. Careful manipulation of language enabled the project to strike this balance and “to create […] the impression, also on [the municipality’s] side, that, ‘oh, yes, we are aligned.’” Safet closely monitors his relationship with the municipality, alert to the inevitability of compromise and prepared to “drop out” if the project loses touch with its political vision, even whilst he embraces the possibility of municipalist alliances:

we approached [the project] already with the sense that: “OK, like we don’t even know if this would work out politically, if we will have to lose our souls at some point or drop out. But it’s worth the try already.”

Safet identifies that shared vocabularies of municipalism can convey an “impression” of alignment between diverse political actors. But how deep are municipalist alliances founded on such impressions? Municipalism in Amsterdam faces significant challenges, as our report found, from negotiating historical legacies of distrust between social movements and the municipality, to building democratic participation inclusively. These challenges are exacerbated by the limited timescale currently allotted to the Fearless Cities Programme, set to run only until the end of 2021.

The process of building trust between social movements and institutional politics takes a serious investment of time, resources and creativity. Former squatters warned us of the dangers of what Joost called “the sophisticated bourgeois policy of the Dutch […] called repressive tolerance”, in which squats have, over decades, been legalized and co-opted by the municipality, in a process facilitating gentrification.

More recently, other kinds of municipalist participatory initiatives have been heavily criticized. Toby, a commons activist, describes how a proposal for a park re-development submitted by a coalition of neighbourhood initiatives was rejected. The local initiatives had applied for funding to establish community gardens growing Surinamese vegetables in the park. The municipality, however, inspired by this idea, decided to award funds to a research institute which conducted a scientific investigation into whether Surinamese vegetables could grow in the park; the fact that locals had been growing Surinamese vegetables in the area for decades was not registered. Toby describes the inhabitants as “really wounded and upset” as their knowledge and perspectives were sidelined. In Toby’s eyes, deep-rooted political cultures make it hard for policymakers to embrace bottom-up participatory municipalist processes; explaining

they were too fearful to work with lots of different groups. They prefer to work with one group [and…] more with institutions as well. They feel like conflict can arise. And there’s this fear of working with difference and also taking time to share decision-making.

Stories like these expose the limits of the municipalist vocabulary when it is disconnected from concrete practices of alliance building, and the power of fear to overwhelm the daily realities of politics in supposedly “Fearless” Amsterdam.

Municipalism is in its early stages in Amsterdam, but if it is to develop beyond them, the municipality must recognise its new political vocabulary as a tool for politicisation rooted in practice. Municipalist discussion forums are cognisant of this. For example, Joost’s community centre holds a regular “Commons Lab” where case studies of Amsterdam initiatives are discussed; recently an event on “alliances” brought together activists from a community centre in the north, a women’s support group in the west, and a neighbourhood advocacy organisation in the south-east, where a large urban development is being built. In these spaces, and through these practices, people in Amsterdam can go beyond the productive vagueness of “municipalism” and “commoning” to begin seeking collective definitions and developing political practices rooted in the context of this city.

Yet more concretely, the Fearless Cities Programme is experimenting with several pilot projects. Community wealth building methodologies, for example, have been employed to help local movements in disenfranchised neighbourhoods develop their neighbourhoods as a commons, where wealth generated locally is re-distributed locally. It is through direct experience of these experimental initiatives that terms like “municipalism” and “the commons” can gain meaning for people who have been cut off from politics in the past decades.

Our report ends with a list of recommendations inspired by activists and policymakers who described their challenges and hopes as they negotiate the arrival of new municipalist vocabulary in Amsterdam. Whether through commons assemblies, paying citizens for their participation in municipalist projects, or developing international methodologies of municipalism, Amsterdam must strengthen the fragile alliances forming around new shared vocabularies by putting municipalism into practice.

Report #6: Making the future: A shift toward a municipalist, peri-urban territorial order in Ciudad Futura, Argentina

Summer of Fire: Municipalism and the George Floyd Uprising