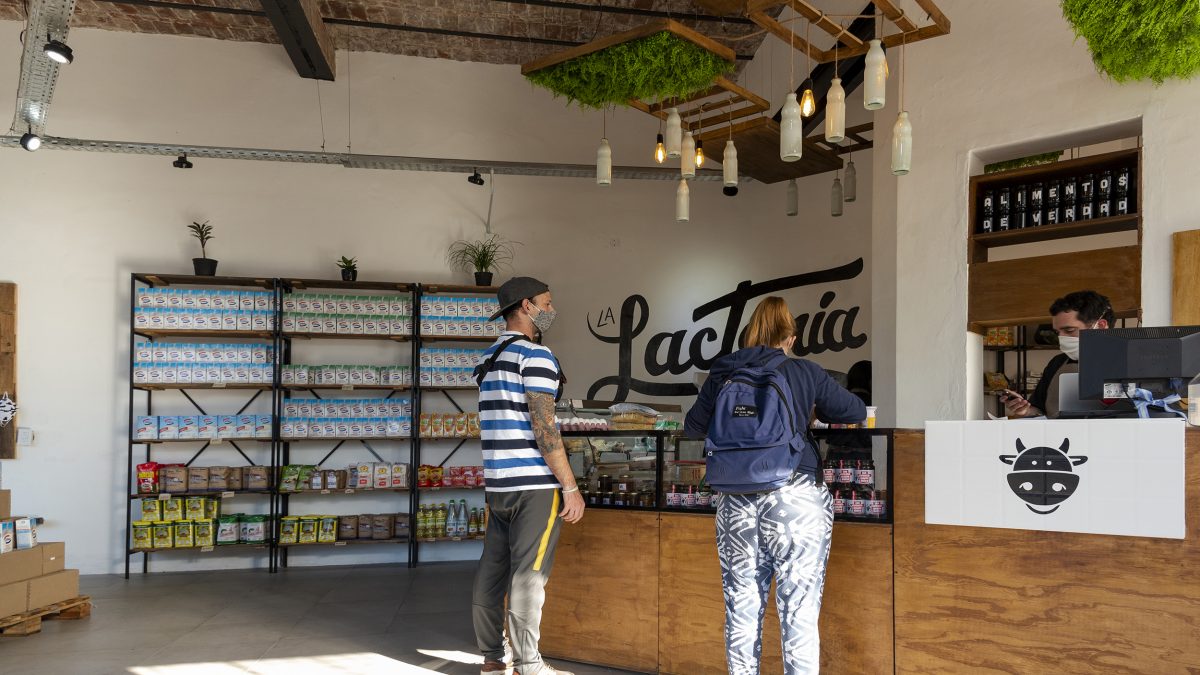 La Lactería is a project that was born as a first answer to a basic question: if bakeries, butchers or vegetable grocers exist, why do we have to go to supermarkets to have access to dairy products? Why isn’t there a place where we can find this kind of affordable, quality food without falling into the trap of the big intermediaries? So: enter, La Lactería.

Far from a random initiative, the construction of a concrete solution to this question is nourished by many years of efforts to guarantee access to food, to generate alternative systems of production and distribution, to question consumption patterns, and especially to politicize our daily lives. Basically, the project contributes to this daily exercise of questioning the fact that today something basic and elementary like food is no longer a right but a privilege.

This project arises from the cooperation of three organizations from the city of Rosario, Argentina: Ciudad Futura, a movement-party, Tambo La Resistencia (the last dairy farm in the city and part of the movement-party) and Cotar, a dairy cooperative with more than 80 years of experience. They come from different backgrounds but have joined together to find alternatives to the question of why in Argentina, sometimes known as  “the country of cows”, milk costs more than anywhere else in the world. A situation that has worsened in recent years as a result of the implementation of neoliberal policies by the Macri administration (2015-2019).

With this project we intend to fight several battles in relation to food. But the “zero degree” of this dispute lies in the principle that the best way of arguing is by doing, by building concrete projects that show ordinary people that another model is possible. Without that materiality, no effective battle of ideas can take place.

La Lactería is a form of cutting out the middle-men, generating a direct link between producers and consumers, avoiding large intermediaries who don’t add any value to the product but always end up taking the greater part of profits.

The aim is to build direct bonds between producers and consumers, without intermediaries, in order to achieve a fairer exchange for both. Just to illustrate this unfair situation, we can state that today in Argentina a farmer receives $17 for a litre of milk yet in a supermarket it can cost as much as $70.

The material dimension of the project is so important that, in fact, the location of La Lactería is not casual – it is in front of an important store of one of the largest hypermarket chains in Rosario. In this sense, La Lactería exists to build an alternative model: not one that exists on the margins. it’s aim is to dispute the hegemonic model.

One of the challenges we set ourselves with this project was also to deepen a global discussion that has to do with the origin of food: What do we eat when we eat?

Some people say we eat products, not food. That the market stopped producing food, instead selling us things engineered to stimulate our senses. Things that we don’t understand, but that we can’t stop consuming. Unhealthy industrial preparations, which stimulate our appetite but do not nourish us. The “ultra processed” as some call them.

That’s why at La Lacteria we also help to read labels as the best way to recognize them. “If the label has more than 6 or 7 ingredients, be suspicious,” says Miryam Gorban, Professor of Food Sovereignty at the University of Buenos Aires. And we put the phrase on a giant poster, inviting everyone to do this exercise. Because a fair market also needs committed consumers, interested in knowing not only how much something costs but what they are actually buying.

Once again, as an example, in Argentina a product was marketed with a package as if it was milk, with a graphic as if it was milk, and it was sold in shelves next to the milk. But if you read the label its description was “dairy product”, not milk. It was diluted milk with less nutritional value. And so thousands of products (including those that are marketed as healthy or light) are known to mislead consumers through their brands and packaging.

On the other hand, the origin of food leads us to ask ourselves about productive models: Where does the food we eat come from? How many kilometers do these foods travel? Who produces them and under what working conditions?

According to official data from 2018, in Argentina 44% of informal work was registered in rural areas, including situations of slavery and child labour. This situation is diametrically opposed to the experiences of cooperatives like La Resistencia and so many others that work the land in a dignified and communitarian way.What is becoming increasingly evident is that the model of hyper-concentration of people and consumption in cities and agricultural frontiers, expanding at the speed, need and voracity of the market is not sustainable.

La Resistencia dairy farm is a clear example of an alternative model. Located in the rural northwest area of Rosario,  it is named after the principle of defending the land against real estate speculation, which intends to develop a private neighborhood. La Resistencia built its own dairy factory on the same land to add value at the source, and at the same time it built its own commercialization chain that grows from a network of associates to La Lactería.  All this in the third city of the country.

With this we want to show that one of the keys to building a new model of sustainable production is the local policies that can be developed. We need to change the paradigm of the city as existing only for consumers, to put them to work producing food. We need to demonstrate that in those “rurban” lands, on the margins, the edges of the cities, there are strategic places where another economy can be developed. There appears another fundamental question – ownership and access to land itself – but that deserves a special chapter.

It is possible to generate environmentally friendly food from its production, and also in its distribution? We believe it is possible. For every liter of Cotar milk or spoonful of Dulce de Leche from La Resistencia, consumed by any inhabitant of Rosario, the environmental impact will be much lower compared to the consumption of products that come from further afield.

In short, this project seeks to make a contribution to the debate on Food Sovereignty. On the possibility of the people to choose what to eat and how to produce it. Prioritizing common welfare and health and not the profit margins of large national or multinational companies. This is not an issue that can be disparagingly marginalised as a “rural” concern, and La Lacteria demonstrates that coordinated action on food sovereignty can happen in our cities.

We are convinced that access to food is one of the great strategic debates that lie ahead. Progress in that dispute will not be built only from great statements or legislation; we need to put into practice more sustainable and replicable models of production, distribution and consumption. In fact, the model of La Lactería already has growth projections not only in Rosario but in the whole country.

It is not enough to criticize or point out what is wrong with the current hegemonic model; we have to start building a different one, bringing it closer to the people so that they can see it and choose it. That is La Lactería.