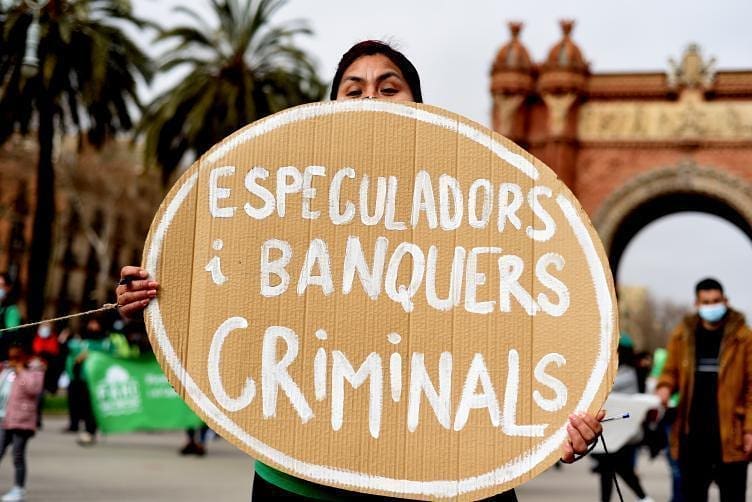 As explained by Matthew Thompson, new municipalism is not just about municipal governments defining and implementing transformative public policies at the local level. It means laying out a new political project, one in which the municipal government is the starting point, and where institutional actors are articulated with organized civil society and social movements, in order to define changes whose objectives may well be on the local scale, but often go beyond it. This entails building transformational processes where the institutional capacity of municipal governments, together with pressure brought to bear by social movements, can have an impact on regional and national politics.

One such example is the battle to regulate rents in Spain. Of course, this struggle is not limited to the Spanish context, as existence of a the vibrant movement in Berlin attests. In Spain, this battle is being fought most vigorously in cities where the effects caused by rising rental prices have become unsustainable. However, the drive for change has to be deployed at other levels of government which have regulatory capacity for rent regulation. Of all the Autonomous Communities in Spain, Catalonia is where this fight has gained most ground so far.

In Catalonia, the campaign to regulate rents undertaken by organized civil society (groups such as the Sindicat de Llogateres, the Xarxa d’Economia Solidària, the Confederació d’Associacions Veïnals de Catalunya and the Observatori DESC, among others) has been supported by municipal coalitions and has managed to insert itself into the regional governmental debate. Thus, after a great deal of negotiation and trade-offs, on September 18, 2020, Law number 11/2020 was finally approved. This puts ceilings on rental prices, encouraging them to be lowered. After achieving this triumph in Catalonia, the next step was to establish equivalent regulations at the national level, by legally consolidating what had been achieved in Catalonia and extending it to the whole of Spain.

According to the agreement reached in October 2020 by the current national government coalition partners PSOE and Unidas Podemos: “the necessary regulatory measures will be endorsed to put a stop to disproportionate increases in rental prices”. This regulation is tabled to be included in the new housing law that the two coalition partners are working on. However, at the state level, it appears that there is strong resistance from the PSOE part of the partnership, and it will be difficult to get this regulation approved. In the following paragraphs, I will try to explain one of the reasons why there is so much resistance to this type of change and the part that new municipalism can play in articulating the struggle.

Can we envisage other forms of ownership?

When we examine views that are critical of the Spanish model of access to housing, home ownership itself is often seen as blameworthy. The proportion of homeowners is thus compared to that of renters (in 2019, 76% of the population lived in a flat that they owned); it is as though private property were the root of all evil. Indeed, those critical of the Spanish model often appear to admire other countries that have a more equitable distribution between ownership and rental regimes.

Please don’t misunderstand me: I am not saying that it would not be good to have a better distribution between of ownership and rental regimes; it is just that we cannot see this as the only solution, without stopping to dwell on the very meaning of property. What I mean to say is that the problem is not private property in and of itself, but how we have conceptualized it thus far. As Paolo Grossi asks, can we think of other forms of ownership? I think that we can, but the only way to envisage other ways of ownership entails not only questioning private property as we have imagined it up until now, but also questioning one of the founding principles of our modern western society: freedom.

In truth, in the course of the different battles fought for housing rights, such as that of rent regulation, we already use another conception of property. Because of this, I do not think that what I am going to say here is anything very new; rather, what I hope to do is to highlight how these battles and the forms of resistance they encounter are framed in an important paradigm shift, not only of the ownership regime but also of our liberal-democratic society in general, because they imply making an interpretive transformation of one of the principles that regulate it.

In our societies, the usual interpretation of private property is the one related to Roman law: property is understood as a form of absolute dominion of the owner over the thing, in this case, a dwelling. This means that the owner can do whatever they want with their property, in particular, they can commodify it. In Roman law, private property was in fact perpetual, exclusive and absolute. More importantly, Roman private property could be transferred in a mercantile process.

Here we come to a very important moment, in which we find the connection made between property and freedom. Slaves were defined as those who could not buy goods through exchange. Therefore, in contrast, those who could buy goods through exchange were free. Here we see the prevailing value of Roman law: anticipating the essence of our modern society by identifying the freedom of individuals with the possibility of owning goods and commodify them. In fact, this interpretation of property would later be taken up in the western civil codes, including the Spanish Civil Code. The idea of private property did in fact change in the Middle Ages, but nowadays the concept has returned to how it was characterized in Roman times: once again, it represents the central element of our society and is intimately linked to the value of freedom.

In reality, there are indeed limitations placed on ownership. The Spanish Civil Code establishes that property is the right to enjoy and possess something, with no limitations other than those established by the law. This is also included in the Constitution, where it is established that property must necessarily comply with the well-known “social function”. In other words, limitations to private property, such as expropriation, are indeed considered; however, these limitations are very few in number and their scarcity seems to be mainly due to the fact that property is always thought of as something akin to the owner having absolute dominion over the thing owned, in this case, a dwelling. In other words, there may be limitations on property, but they are considered an exception to the rule.

Private property (as a bundle of rights) and freedom

This interpretation is crucial because it allows us to establish rules and restrictions that should be imposed on the owner in view of some of these rights. If we do indeed understand property as a set of rights, then within this set, it is evident that not all rights have the same relevance. Without a doubt two of the most important rights are the right to receive income and the right to capital. Let us imagine that these rights were limited, and that they were truly shaped by the social function of property. If this did in fact happen, we would live in another kind of society altogether: it would still be a society of owners, but a radically different one from the one we live in today. What would our cities be like if the sale price of housing were regulated, just like energy or water had been in some European countries? What would our cities be like if the price of the use of housing, i.e., rental prices, were regulated? And here we swing back to the present, and the present brings us back again to the connection between property and freedom.

The push to pass legislation to regulate rents in Spain is meeting plenty of resistance, not only from the right, which has always been a defender of private property, but also from the Socialists themselves. In fact, Abalos, the Spanish Minister of Transport, Mobility and Urban Agenda, to find a way to avoid capping rents, is suggesting granting tax incentives for owners who lower rents. It is clear that the PSOE does not dare to touch property, and in particular, they do not dare to touch the economic benefits that the use and abuse of property entails. But I think there is also a deeper reason, and that is that limiting the price of rents actually implies a substantive change that impacts our very conception of property, understood as absolute dominion. And if we do not interpret property as the absolute dominion exercised by the individual over the thing owned, especially the power to commodify it, in reality, we are questioning one of the pillars of our liberal-democratic society, that is, the very concept of freedom.

In other words, the struggle cannot be limited only to the socio-economic realm of property (i.e., it is necessary to limit economic gains on property because price increases produce social injustice); the struggle must also take place in the substantive realm of our own concept of property (i.e. it is necessary to cap rents because we cannot consider property as absolute dominion over the thing owned). This fight will not be an easy one, and will require social movements to articulate with and institutional actors. It is thanks to this articulation that this law managed to pass in Catalonia, and it is precisely the difficulty of replicating this articulation on a national scale that is holding back its approval at the level of the Spanish central government. And it is here where new municipalism can play a key role in strengthening this articulation and in building a multi-scale and multi-actor struggle that can allow us to reformulate the concept of property and recover the concept of freedom. This last concept, which has seemingly been taken hostage by the right wing for some time now, must be re-appropriated and remoulded within a radical vision, one where we have other ways of being free and other ways of being owners. In this vision, freedom does not mean doing anything one wants to do, but modulating those acts within collectively established rules; and ownership does not mean exercising absolute dominion over things, but regulating ownership rights in the framework of social justice. As Karl Polanyi has said, “The passing of market-economy” , through the development of an economy regulated by authorities, “can become the beginning of an era of unprecedented freedom. (…) as regulation and control can achieve freedom not only for the few, but for all”.